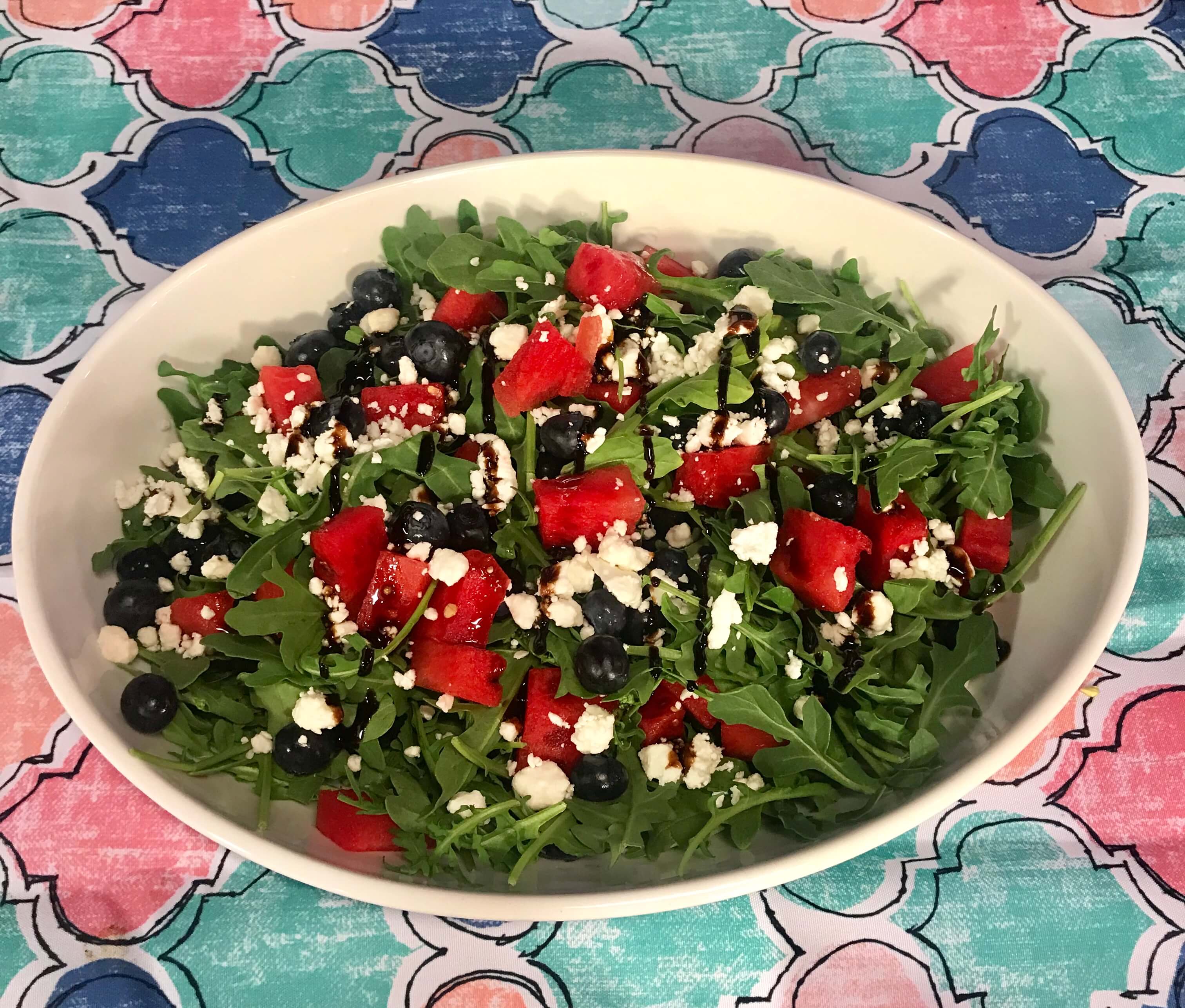 1 tsp. honey or pinch of stevia

Salt and pepper to taste

Combine the cubed watermelon, berries, arugula, herbs and feta in a bowl. Combine all dressing ingredients into a small bowl and whisk. Add dressing to the salad bowl and toss until well combined. Serve immediately. Makes 4 servings.

In a food processor, pulse 1 cup of oats until finely ground and resembling flour. In a mixing bowl, add oat flour, the remaining ½ cup old fashioned oats, pecans, cinnamon, baking soda and salt. Stir to combine. In a separate bowl, combine yogurt, egg, oil, and vanilla. Mix until well combined. Pour wet ingredients into dry ingredients and mix to incorporate. Fold in the blueberries. Using a ¼ cup measuring cup, scoop batter onto pre-heated pan. Gently flatten the batter to resemble patties. Cook for 3-4 minutes, then flip cakes and cook for another 3-4 minutes. Cakes are done when both sides are golden brown and center is set.

Optional: Top with lightly sweetened yogurt and blueberries before serving.

Toast mix nuts, seeds, oats and salt in a medium bowl.  In a separate bowl mix oil, brown sugar and maple syrup until blended. Combine the brown sugar mixture with the dry ingredients. Spread evenly on a greased baking tray. Bakerat 315 degrees, stirring every 15 minutes until golden brown. Allow to cool on baking tray, once cool mix in dried berries and bran flakes.

Bring a large pot of water to a boil, and cook fennel for 10 minutes. Remove and set aside to cool. Slice the bulb into quarters and season with salt and pepper. Grill fennel for 10 minutes each side, or until the pieces begin to soften, but still has a slight crunch. In the meantime, fry pancetta on the stove until crispy, set aside to cool. Add olive oil, red wine vinegar, garlic powder and chopped sage to a small bowl and whisk to emulsify the oil. Season with salt and pepper. Combine fennel with the drained beans and fried pancetta. Toss with dressing, top with Parmesan cheese, and serve.

Keep up with all our recipes by visiting our website.