It’s No Secret: Sustainable Building is Here to Stay 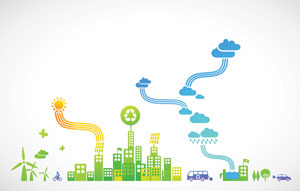 His next-door neighbor on the quiet downtown Phoenix street where Martin and his wife have lived for the past 30 years has, as Martin put it, “made a huge mess of things.”

Martin’s neighbor ripped the asbestos-shingled roof off of her bungalow, and is replacing it with heat-reflective shingles and several solar panels.  Her lawn is littered with detritus from the eco-conscious makeover, and Martin is practically levitating with rage.

“All this nonsense about ‘going green’!”  Martin howled from his front porch.  “It’s all just a stupid fad, anyway.”

Actually, it isn’t.  What began as a trend inspired by ancient forms of conservation that morphed into the environmentalism of the 1970s has grown, locally and nationally, into a way of thinking  about better, more responsible ways to build.  Locally, that trend has blossomed into a movement led by architects like Thomas Hahn at Sol Source, Inc. in Phoenix and Scottsdale builder-designer Kevin Edwards, known nationally for his homes made from straw bales and mostly recycled materials.

The list of architects and designers recognized for green design-build project keeps expanding, thanks in part to green building’s higher profile and to an increased public interest in environmentally friendly construction, materials and designs.  While phrases like “green building” and “sustainable living” may be newfangled, there’s nothing new about living responsibly.

The current trend in sustainable living is not, according to William Janhonen, LEED AP, NAHB-CGP, an American thing.  Janhonen believes that Europeans, who emigrated here in great numbers at the beginning of the last century, brought a conservative frugality and common sense that are at the core of today’s American green movement.

“You go to Provence, France, and there are 600-year-old houses standing,” Janhonen said.  “There’s a real effort to not be wasteful, even among the wealthy, and people live and work in communities that allow them to walk to a local market, so they’re conserving gas and supporting local produce.”

While it’s certainly true that our European forebears brought notions of frugality and conservation to our shores, there’s evidence that the first American green homes were built thousands of years ago.  The ruins of apartment-style living spaces built by the Anasazi Indians as long ago as 700 A.D. have been discovered, built with natural, non-toxic materials, such as stone, mud and wood, and incorporating intricate passive solar heating and natural-ventilation cooling systems.

Flash-forward and—after several thousand years of irresponsible, tumble-down building—these early, more responsible ways of addressing the environment have resurfaced.  Manhattan has the Hearst Tower, considered the first truly green skyscraper in the country.  The Audubon Center at Debs Park in Los Angeles, with more than half of its materials locally manufactured, is the first building in the U.S. to receive a Platinum rating under the revised Leadership in the now-renowned Energy and Environmental Design (LEED) system.  And there’s the widely admired Environmental Living and Learning Center at Ashland, Wisconsin’s Northland College, a 32,374-square-foot residence hall made with low-toxicity finishes, green space preservation and a roof that collects storm water for reuse.

“The awareness curve of the whole country has been expanding for some time,” said Anthony Floyd, the Senior Consultant for the City of Scottsdale’s Green Building Program, the first such program in the state.  “Here in Scottsdale, our awareness of sustainable living goes back to the founding of the city.  We responded to the Indian Bend Wash debacle very quickly, and we made early attempts to create a green belt long before awareness of such things became the norm.”

Floyd and company also made early efforts to tailor construction to life in the Sonoran Desert.  “Back then, in the early ‘90s, we weren’t sure that ‘green’ was even the right word,” Floyd said, laughing.  “We didn’t want to give the impression that we were trying to green the desert.  We wanted to use the term ‘sustainable building,’ but ‘green’ was being used most consistently, so we gave in.”

Floyd points to the development of DC Ranch, in which developers approached the McDowell Mountains as an asset by integrating walking roads and bike paths into a landscape that embraced the desert, rather than try to obscure it with bearing walls.  But even the greenest of green designs, Floyd contends, can be useless when they’re surrounded by incompatible, resource-hogging structures.

“You can have green buildings throughout a community, but it doesn’t mean the community overall is sustainable,” Floyd said.  “There needs to be coordination among the buildings in a community, and the people living and working there need to consider the energy efficiency of the buildings and the buildings’ relationship to one another.  What’s important is the bigger picture and how everything works together.”

Creating examples of sustainable communities that consider urban density is the key, Floyd believes, to the Valley’s success.  He’s excited about Blue Sky, a high-rise, mixed-use apartment building approved in April by the Scottsdale City Council.  The 749-unit complex will include 43,000 square feet of street-level retail space, a 27,000-square-foot recreation center and 1,350 underground parking spaces, with all features approved by the City as environmentally sound.  “The project will be a pedestrian-oriented neighborhood that will include vegetated terraces to reduce the heat island effect, and an emphasis on rainwater management,” Floyd said—all evidence of a city that’s maturing as it grows, rather than just expanding its current, and perhaps less responsible, grid.

Meanwhile, Phoenix is taking what Janhonen calls “baby steps” toward similarly forward-thinking city planning.  The City’s Downtown Phoenix Urban Form Project has launched plans for a more integrated and sustainable downtown, with a proposed rezoning of residential, retail and office projects to create a downtown filled with shade and pedestrian-oriented streets and sidewalks.  It’s a retrofit that Janhonen has seen work elsewhere, most notably in Santa Fe, where he saw success with covered walkways cooled by open-air misting systems and an eye on creating an integrated, eco-conscious community.

It’s a mindset that both Floyd and Janhonen hope will spill over into public art, because environmentally relevant public art, they say, is always an indicator of a greener community.  In that case, things may be looking up for the Valley, green-wise.  There’s the recently unveiled Soleri Bridge in downtown Scottsdale.  The 100-foot-long pedestrian bridge that connects Scottsdale Fashion Square and the nearby Waterfront shops to the stores and restaurants at Southbridge south of the Arizona Canal opens onto a 22,000-square-foot plaza that’s home to 10 eight-foot concrete panels etched with Soleri designs.  The bridge’s two 64-foot brushed-steel pylons are the heart of the bridge’s gimmick: a solar calendar that generates a light beam onto the surface of the bridge to mark hours and days using the sun’s diurnal and seasonal cycles.  At solar noon each day, a sliver of sunlight breaks through a six-inch gap between the pylons and pierces the shadows cast by the towers.  As winter progresses, the shadows lengthen, growing shorter as summer nears and disappearing altogether on the summer solstice.  It’s functional art that reminds visitors of their connection to the Earth.

Yet the presence of public art doesn’t necessarily mean that the Valley has arrived, sustainability-wise.  “It’s rare that I meet residential clients who have an awareness of building responsibly,” admitted architect Scott Roeder, principal owner of Studio Roeder, a firm whose work includes the much-lauded After Hours gallery, a live-work space on West McDowell Road.

“Eco-friendly building hasn’t filtered into the common knowledge of the layman.  On the other hand, responsible building—the best solar orientation of a building; the best use of good materials—is the responsibility of the builder,” Roeder said.  “It’s something we all learned the first day of school.  My hope for the green movement is that it will remind builders that responsible building isn’t a new thing, it’s a necessary thing.” 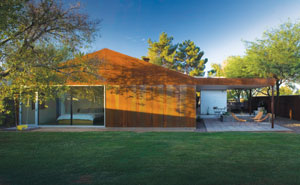 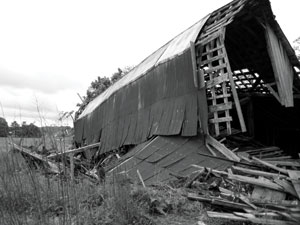 Sensible site evaluation and planning suggested the Earll Residence addition start as a continuation from the existing form of this 1950’s residence, with the result becoming the abstraction of the mid-century ranch home typically equipped with a lean-to style patio. The addition works as a bookend to the existing structure while simultaneously providing a relief of natural light and ventilation between the old and new. Day lighting washes a wall of reclaimed barn siding throughout the breezeway hall via a continuous slot skylight and provides dramatic effects from dusk to dawn. Slated for demolition, a dilapidated 1880’s Midwest barn (below) located adjacent to the owner’s childhood home, was acquired and re-purposed to become the focal point of the projects interior experience. Circulation throughout the interior, including the exterior patio, is in constant connection with the warmth and texture of the material, evoking childhood memories as well as creating new ones for the family.

Robrt Pela has worked as a writer and editor for magazines including Psychology Today, The Advocate, Phoenix Home and Garden, and Men’s Fitness.  For the past 20 years, he’s been a columnist for Phoenix New Times and a correspondent with National Public Radio’s “Morning Edition.”  His last book was Filthy, a biography of the film director John Waters.