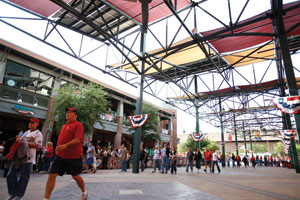 When fans from across the country descend on Chase Field in July for the 2011 Major League All-Star Game, they will get a welcome reprieve from the intense Arizona sun, thanks to a new solar shade pavilion.

Located outside the stadium’s west entrance, where about 75 percent of attendees enter, the APS Solar Pavilion will provide both shade and about 75 kilowatts of solar power for the stadium, said Graham Rossini, senior director of special projects for the Arizona Diamondbacks.  “It serves many purposes,” Rossini said.  “Initially, it gives us shade.  With the amount of people being here in mid-July, we want to make sure we have protection from the [sun] element.”  It will also help cut energy costs, as the Diamondbacks look to control energy consumption, he said.

The structure covers 17,280 square feet and is a partnership between the Diamondbacks, Maricopa County Stadium District and APS.  Rossini said the team has been working with Green Ideas Sustainability Consultants for the past 18 months doing energy audits and developing plans for the future, which include a full-scale recycling program and installing electric car charging stations.

“It’s been refreshing working with a client like the Diamondbacks that’s truly committed to a sustainability program for their facilities,” said Charlie Popeck, LEED AP, president of Green Ideas Sustainability Consultants.  “The Diamondbacks have taken a real leadership position in the world of sustainability, and our vision is to have major league baseball as a whole follow suit.”

“We look at sustainability as a tremendous opportunity,” said Rossini, adding that the team is in the beginning stages of their sustainability initiative.  “We have big plans and a few things underway, but we have plans to grow things exponentially in the months and years ahead.”

The Salt River Fields, the Diamondback’s spring training facility, has also undertaken conservation efforts.  The multipurpose facility built on Salt River Pima-Maricopa Indian Community land (making it the first stadium to be built on Indian land in the country) uses water conservation techniques by capturing rain water and depositing it into a nearby reservoir that they tap for use at any time, Rossini said.  “We’ve got a lot of fields to irrigate and we wanted to make sure weren’t using a lot of water to do that,” he said.  The complex, which has 12 practice fields, is also used by the Colorado Rockies.

From comprehensive recycling programs to LEED-certified ballparks, major- and minor-league baseball teams across the country are looking at ways to go green.  Major League Baseball (MLB) is leading the way with their Team Greening Program, a partnership with the Natural Resources Defense Council that coordinates and supports environmentally friendly practices at the organization’s 30 clubs.  With more than 73 million people attending baseball games last year, it’s important that MLB clubs are sensitive to the environment, said John McHale, Jr., executive vice president, administration and chief information office for Major League Baseball.

“When you consider the resources, energy and goods consumed at these ballparks, the opportunity to recycle paper, cans and bottles, the potential environmental reduction that can be achieved is meaningful,” he said, adding that because baseball is played outside, it is inextricably linked to the environment.  “That gives us an obvious connection to make a commitment to sustainable operations.”

All 30 of the MLB clubs have environmental initiatives and goals in place, some with more than others, McHale said.  The 2010 World Series Champions, the San Francisco Giants, have one of the greenest ballparks within the MLB organization.  They play in a LEED-certified ballpark, have solar panels and use environmentally friendly products.  McHale also noted the Seattle Mariners, one of the founding members of the Green Sports Alliance, have staged carbon-neutral games on Earth Day and were one of the first MLB teams to recycle food waste.  The Philadelphia Phillies, meanwhile, have focused on offsetting the team’s carbon footprint at Citizen Bank Park.  For the past four years, the team has purchased 20 million kilowatt-hours of Green-e Renewable Energy Certificates to cover the team’s energy use for the year.

In 2009, a Greening Committee was created at select clubs.  The committee’s first recommendation was to create a new software tool for ballpark management.  It was launched in 2010, McHale said.  “The software system collects and analyzes stadium operations data to develop and distribute best-practice information across 30 clubs,” he said.  “This is the first time a professional sports league has implemented a software program throughout the league to collect data for the purpose of documenting environmental practices and for sharing information about environmental best practices at stadiums.”

And it’s not just MLB teams going green.  Minor league teams are also taking steps to improve sustainability.  The Lake Elsinore Storm, a Class A team in Lake Elsinore, California, has waterless urinals and tankless water heaters at its stadium and reclaimed water irrigation pipes.  According to the team’s official website, the changes have contributed in saving 25 million gallons of water and $100,000 in costs over two years.  Retrofitting the stadium with a new energy-efficient lighting system has conserved 101,000 kilowatt-hours annually and shaved $20,000 off the annual operating budget, according to the website.
Several major and minor league teams across the country also have kiosks located within their stadiums to make recycling easier and more enticing.

The kiosks are part of PepsiCo’s Dream Machine, a multi-year collaboration with Waste Management and Keep America Beautiful that is introducing thousands of recycling kiosks and bins at public locations across the United States.  The computerized receptacles have a personal reward system allowing consumers to earn points for every bottle or can they recycle in the kiosk.  The points can be redeemed for discounts on entertainment, dining and travel by visiting greenopolis.com, which powers the system, according to Tim Carey, director for Sustainability and Technology at PepsiCo.

“It takes only a small change in behavior to make a big difference for our planet,” Carey said.  “If every household in the U.S. recycled just three more plastic bottles a month, we could divert more than 23 million pounds of plastic from our landfills.”

Photography courtesy of the Arizona Diamondbacks