The famed meditation mogul talks about his upcoming book, society’s need for spiritual guidance, and how he defines purpose. 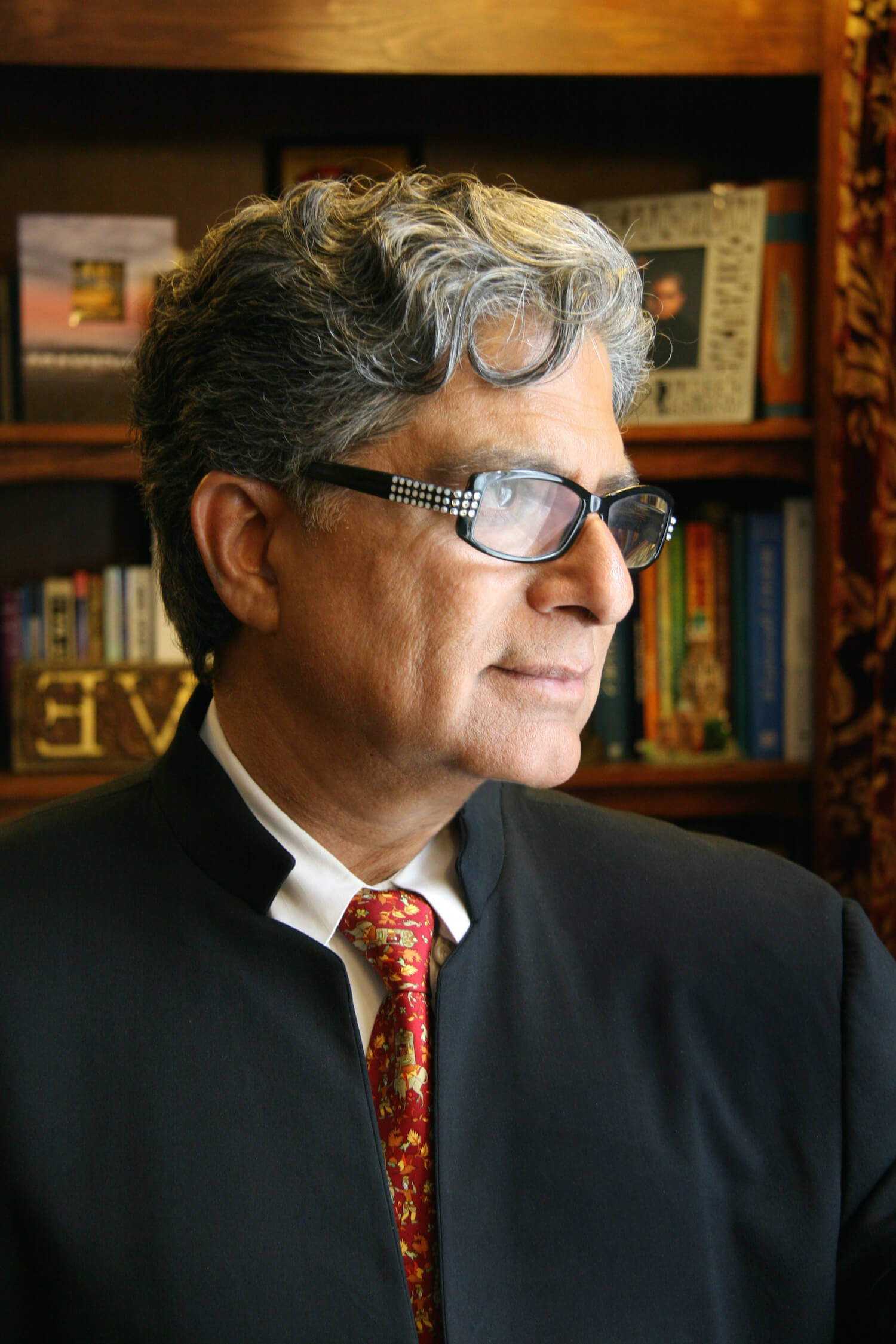 At 73, the pioneer of the New Age movement and world-renowned meditation mogul, Deepak Chopra, shows no signs of slowing down. Those who have followed his career or teachings know that he’s a man who has long advocated for the belief that mental balance can be the determinant of physical health—and that people can actually free themselves from disease or aging, so long as they’re in the right mental space. While his work has inspired some controversy in scientific communities, his life—in many ways—serves as proof that perhaps wellness isn’t necessarily a state of being, but rather a state of mind.

Chopra was born in New Delhi and studied medicine in India. After moving to the United States in 1970 and becoming involved in endocrinology and the Transcendental Meditation movement, he relocated out West and adopted roles as a spiritual advisor and doctor to celebrities like Michael Jackson and Elizabeth Taylor, among others.

Since then, he’s evolved into one of the most influential figures in the world—known for his interpretations of traditional spiritual teachings, his advocacy for alternative medicine, and his extensive knowledge of soulful living and wellness that he’s generously shared with his fans through over 90 books.

Chopra has famously hosted meditation series alongside longtime pal Oprah Winfrey, and was even described by TIME magazine as “one of the top 100 heroes and icons of the century.”

In a season that’s generally slowed down the pace of life for most people, Chopra has found the need for connectivity and spiritual guidance to be more imperative than ever before— and as a result, he’s worked to extend his brand’s reach in both the digital and social landscapes to meet this need.

I had the chance to speak with Chopra about his upcoming projects, his desire to make meditation and wellness practices more accessible, and how he’s viewing this season as a creative opportunity. This interview has been edited for length and clarity. 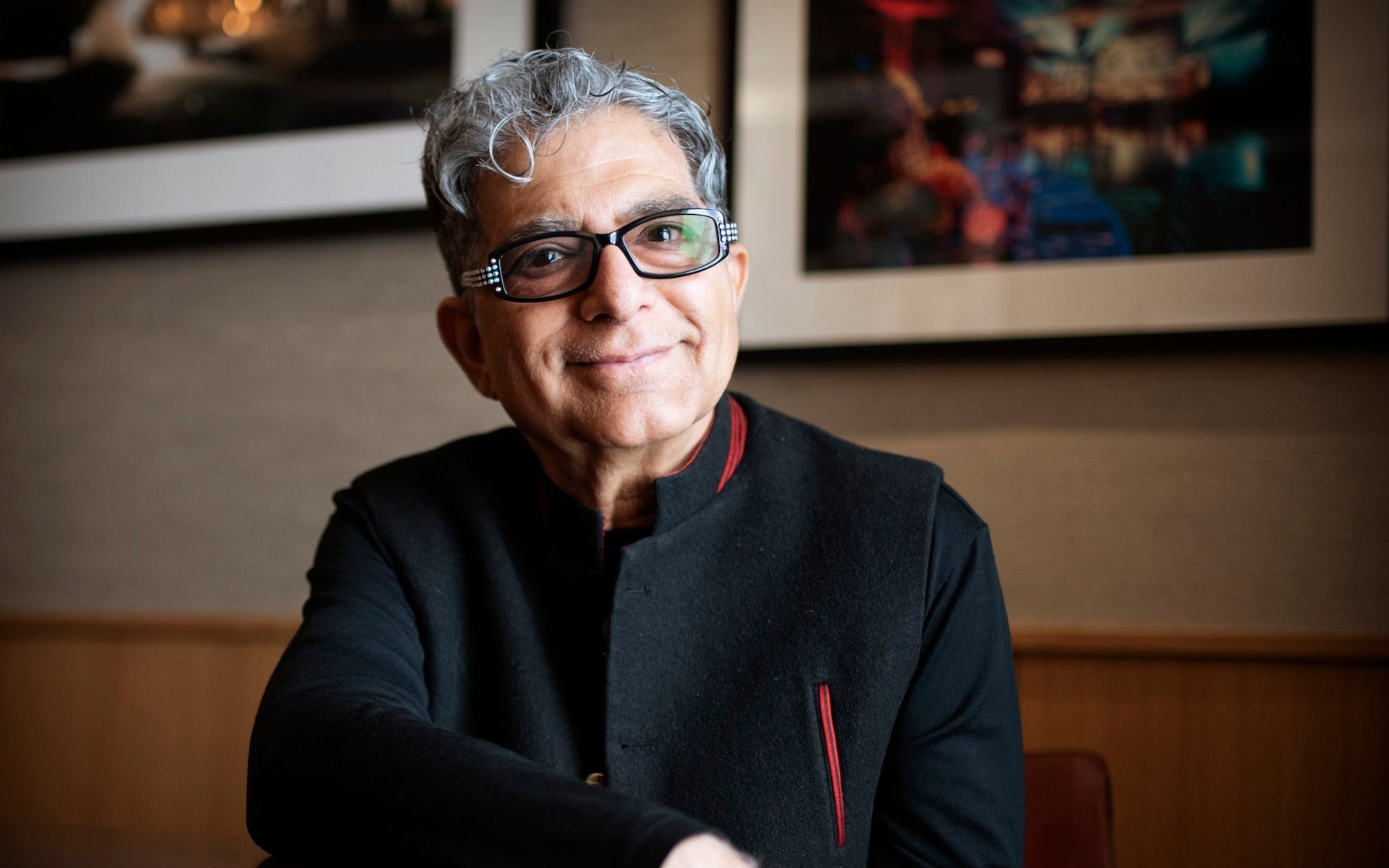 We’re living in a time when people are navigating a range of emotions and feelings, which your work really helps to make sense of. But at this moment, honestly, how are you feeling, Deepak?

Actually, I’m feeling really good about how this is an opportunity for us to not only renew our own body by resurrecting our soul but also actually repair the world and go beyond the immediate grief which we’re naturally experiencing.

And, you know, I’m actually more effective now in my work. I’m not traveling, and I’m reaching more people. I’m busier than ever, although I keep up with my schedule of yoga and meditation, and exercise and nutrition and good sleep.

You’ve written 90 books, which have sold millions of copies worldwide. Now, your 91st book, Total Meditation, is set to come out this fall. Tell me a bit about the message of this book and what you hope audiences will take away from it.

Right now, of course, meditation is very popular. And people are seeing the benefits of meditation—not only biological and physiological benefits—but everything from personal relationships to emotions to sleep. Meditation also is for higher consciousness in accessing that part of your being which spiritual traditions call the soul.

The new book actually takes everyone and says, “You can be in this space of meditation no matter where you are in your journey.” Total meditation is how you stay centered and connected to your soul—not to your mind or to your body, but to that part of your being. If you can stay there, then you have access to creativity, imagination, inspiration, intuition, love, compassion, joy, empathy, and to the conquest of the fear of death.

This is what the gift is from the wisdom traditions. So, I tried to put everything that the wisdom traditions of the world—whether it’s East or West, Chinese, Indian, Gnostic Gospels, whatever—I have taken the essence of their teachings, and put it in this book called Total Meditation.

The Chopra brand is continuing to expand its reach in the digital realm, as well—now in the form of a meditation app, which will help to make your teachings even more accessible. How is this app different from others that are currently on the market?

So, with Oprah and our team, we have reached almost
10 million people with three meditations online. This app acts as more of a well-being journey that can be personalized. You never know where people go in their journeys, but you always help them where they are. And people are looking for some kind of guidance on where they are. So, this is more personalized, more in the direction of giving you feedback on not just meditation, but everything— stress management, personal relationships, nutrition connection, nature, creativity, and high consciousness.

So many people look to you for guidance in spirituality and wholeness. I imagine that can feel a bit overwhelming at times. Who do you look to for guidance in living well?

My role models always have been, and continue to be, my parents, who are no longer alive. But you know, even at night I communicate with my parents because I remember all
the things they taught me. I did my best to do that to my children and to their children. Otherwise, I don’t at the moment seek guidance from anyone. But from the stillness of meditation is the best guidance we can get.

A new PBS TV special called Deepak Chopra: Becoming Metahuman airs at the end of this month. How long have you been working on this special and what can audiences expect?

Over a year, and the PBS special has a lot of luminaries, scientists, astrophysicists, biologists, and neuroscientists,
all looking at what it means to find our spirit or go beyond the conditioned mind, where we find infinite creativity, authenticity, a higher calling—and where we can prepare our wounded soul, both collectively and individually.

The PBS version will air on approximately 400 stations across the country for several months, also on some selected stations in Canada. We hope to actually change the conversation for those around the country on what is possible if we go beyond our divisive, conditioned minds.

You’ve argued that “contemporary physics can take us to the horizon of reality, the womb of creation, but it cannot cross the boundary between us and our source of existence.” As a modern-day health company, what sort of work is Chopra Global doing specifically to bridge that intersection of science and spirituality?

The best scientific data and the best on wisdom traditions. We combine the two to create a scientific and spiritual basis for healing, or what we can call “whole health” instead of fragmented health.

How would you define your purpose and existence?

My purpose, ultimately, is to know myself beyond my physical body, mind, and world experience. And to realize my identity beyond my personal identity. And that, in Eastern wisdom traditions, is called self-realization or enlightenment. And that’s all my purpose is. The rest follows, but when you transcend your personal identity, you’re one with the world.