4 Reasons to Go Solar Before the APS Deadline

It seems like we’re always gearing up for the next solar deadline, even though we just passed some important ones, like those associated with the APS rate case in 2017. When the Arizona Corporation Commission (ACC) approved that rate case last year, solar customers who were able to lock in their solar contracts before the big vote breathed a massive sigh of relief. After all, those very people are now enjoying the financial benefits that come with clean solar energy and 20 years of grandfathered solar rates.

While that opportunity has come and gone, Arizonans are once again staring at a critical APS solar deadline. Part of the changes that were passed in the 2017 rate case allow APS to re-evaluate their solar buyback rate every September. What history tells us is that this rate is likely to decrease, as increases have rarely occurred. Customers who lock in their solar contracts before this deadline will be shielded from future rate changes and grandfathered into today’s best rates.

Acting quick and taking advantage of current solar incentives is generally the most lucrative choice when evaluating the ROI on a solar energy investment. In that spirit, here are four big reasons that now is the time to go solar in Arizona. 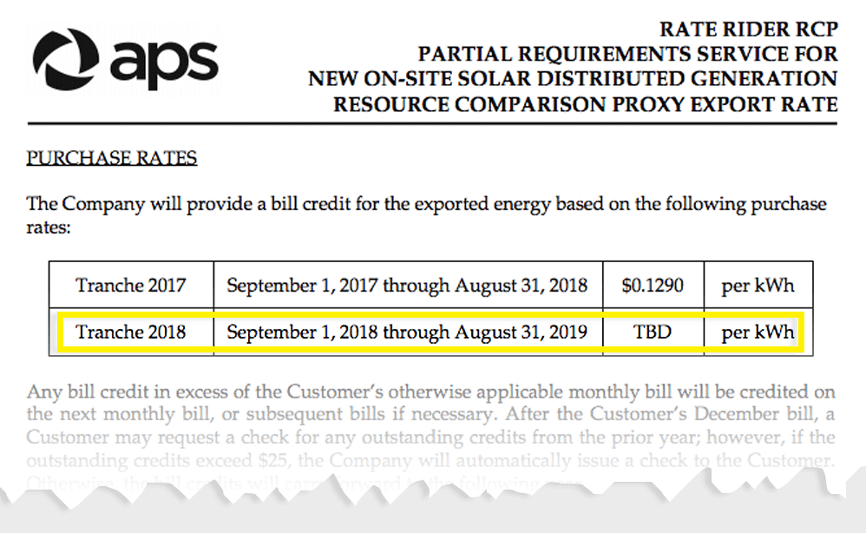 1. The current 12.9 cent buyback rate is under review and likely to decrease.

In 2017, APS removed net metering, the program that offered a 1-to-1 credit for any excess energy sent back to the grid. The current programs have a set buyback rate of 12.9 cents per kWh. This rate is currently being re-evaluated, as it will every year going forward. The upcoming ACC vote will set a new amount for the following year, beginning in September 2018.

2. Locking in a solar contract before September will shield you for 10 years.

APS honors solar contracts for 10 years (this was changed from 20 years in the rate case in 2017). People considering solar should lock in an APS solar contract before September to ensure access to today’s best rates and immunity from rate shifts for the next decade.

The federal solar investment tax credit (ITC) allows solar customers to offset 30 percent of a solar purchase through their yearly tax filing. The state of Arizona also offers a flat $1,000 tax credit and no sales tax when going solar. The 30 percent ITC is only available through 2019, after which it begins dropping before disappearing entirely after 2021.

4. Batteries are the hot new item in solar, with incentives available for a limited time.

Adding a battery to a residential solar system allows customers to store excess solar energy for use at night or to offset expensive on-peak hours. For a limited time, SRP is offering up to $1,800 back for battery additions. Plus, the 30 percent federal solar tax credit can be applied to any battery system powered by solar, regardless of utility provider. The 30 percent ITC incentive begins dropping after 2019.

Customers looking to cash in their piece of Arizona’s abundant sunshine and take advantage of incentive programs before they’re gone should contact Sun Valley Solar Solutions at 480-689-5000 or via email at gogreen@sunvalleysolar.com.