This Astrotourism Paradise Is In Plain Sight

Nearly 80% of North Americans can no longer see the Milky Way from their homes, reports a study published by the “Journal of Science Advances.” As a result, more people are traveling to seek out dark skies as a source of beauty and inspiration. Astrotourism encourages travelers to observe and explore the night skies in ways they’ve not experienced dark skies before.

The best places for skies brimming with stars have clear, dark skies throughout the year. Locations with less air haze and light pollution are best, of course. Prime spots for stargazing have arid climates because there is less chance of clouds blocking the heavenly views. Our northern neighbor, Flagstaff, fits the bill to a tee. So it’s not surprising that this astrotourism paradise has been a mecca for skywatchers for centuries.

“Flagstaff has an unmatched tradition of protecting night skies and has succeeded in keeping our night skies filled with stars despite our growth. We were the first recognized International Dark-Sky Community, designated in 2001,” cofounder of Flagstaff Dark Skies Coalition, Christian B. Luginbuhl said. International Dark-Sky Association initiated the designation program to encourage communities, parks and places to preserve and protect dark sites. Flagstaff became a poster child of sorts for the program, and since then, others in Northern Arizona — and the world — have followed suit, meeting strict criteria to earn the dark-sky designation.

Besides Wupatki, there are plenty of other parks in Northern Arizona where visitors gaze in amazement at the blanket of stars spreading overhead. For example, Sunset Crater, Walnut Canyon National Monument and Grand Canyon National Park are designated dark-sky parks. Many of these parks have sun markers, spirals and other petroglyphs marking spots from which ancient peoples watched the sun, stars and planets. They are evidence that people have been watching the skies here for centuries.

“We often claim that Flagstaff has the world’s most accessible dark skies because, at our Buffalo Park, you can experience expansive horizons and thousands of stars within a five- or 10-minute drive of all of the amenities of our town, including hotels, restaurants and everything else,” Luginbuhl, a retired astronomer from the United States Naval Observatory adds.

Astronomy enthusiasts explore Flagstaff’s natural surroundings in the world’s largest ponderosa pine forest throughout the day. Sky gazers can visit an archaeoastronomical site at Wupatki National Monument and on their way there, they could walk in the footsteps of NASA astronauts that trained at Cinder Lakes for their moon missions.

Exploring Flagstaff’s scientific role in the Apollo moon missions is best done during daylight. NASA chose the mountain town because of its central location near natural landmarks suitable for training NASA astronauts, including Sunset Crater (currently closed due to the aftermath of the Tunnel Fire), Cinder Lakes and Meteor Crater.

As the DSB brewmeisters tout on their website, they create beers “as unique and beautiful as every star, meteor and comet we can see from our backyard.” Guests hoist a glass and nosh on pizza from Pizzicletta, another Flagstaff favorite. DSB is only one of eight craft breweries on the Flagstaff Brewery Trail. For more information, visit www.craftbeerflg.com.

Observations made at the unusual three-story Wukoki site at Wupatki National Monument suggest that it may have marked cardinal positions of the sun and moon in the 12th century.

When night falls, star hunters can witness an astronomical event (like the Perseid meteor shower or an eclipse), explore the galaxies at Lowell Observatory, try their hand at astrophotography or attend an annual star party.

Astronomers discovered Pluto at Lowell Observatory, making it a historic destination for astrotourism. However, not to rest on their laurels, over a dozen tenured astronomers and planetary scientists currently conduct research using ground-based telescopes, telescopes in space and NASA planetary spacecraft.

Lowell’s historic and cutting-edge telescopes provide visitors with incredible views of the night sky. Astronomy buffs are able to stand inside the Pluto House, the very place where Pluto was discovered. In addition, they can look through the world-famous Clark Telescope, which was used by the astronauts of the Apollo 11 moon mission for training purposes.

Those new to skywatching and old pros alike will be thrilled by viewing nebulae, colorful planets and rich star fields at Lowell’s Giovale Open Deck Observatory. Six advanced telescopes take telescopic observation to the next level. 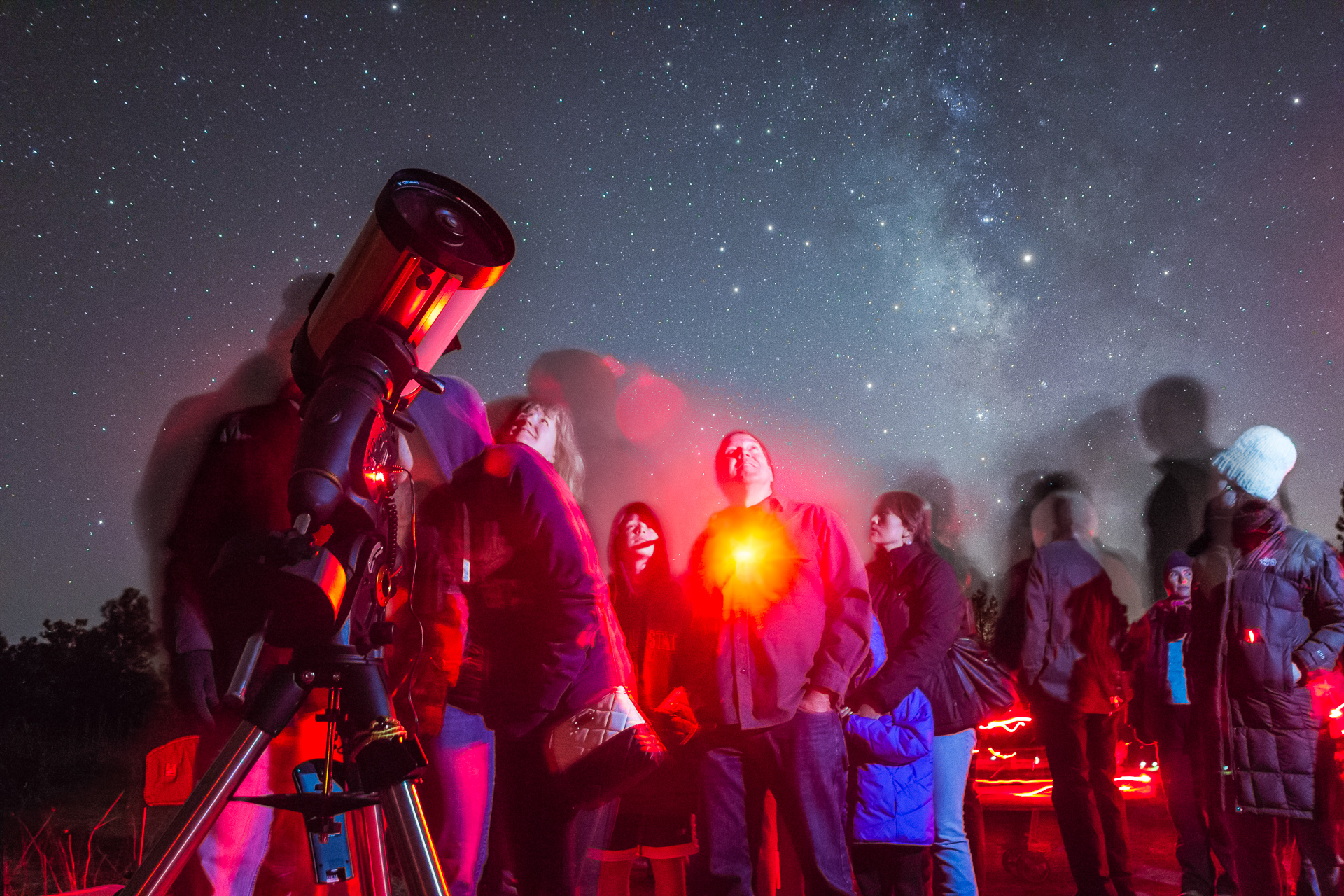 This year, the Flagstaff Star Party occurs on Thursday, September 22 through Saturday, September 24. Up to 30 telescopes, hosted by professional and amateur astronomers, will be available for guided tours of Flagstaff’s dark skies at Buffalo Park.

The best time to visit the International Dark-Sky Community is during the new moon when the Milky Way, stars and galaxies pop off the backdrop of black velvet skies. But with over 161 clear nights and 101 partly cloudy nights per year, Flagstaff attracts astrotourists throughout the lunar calendar.