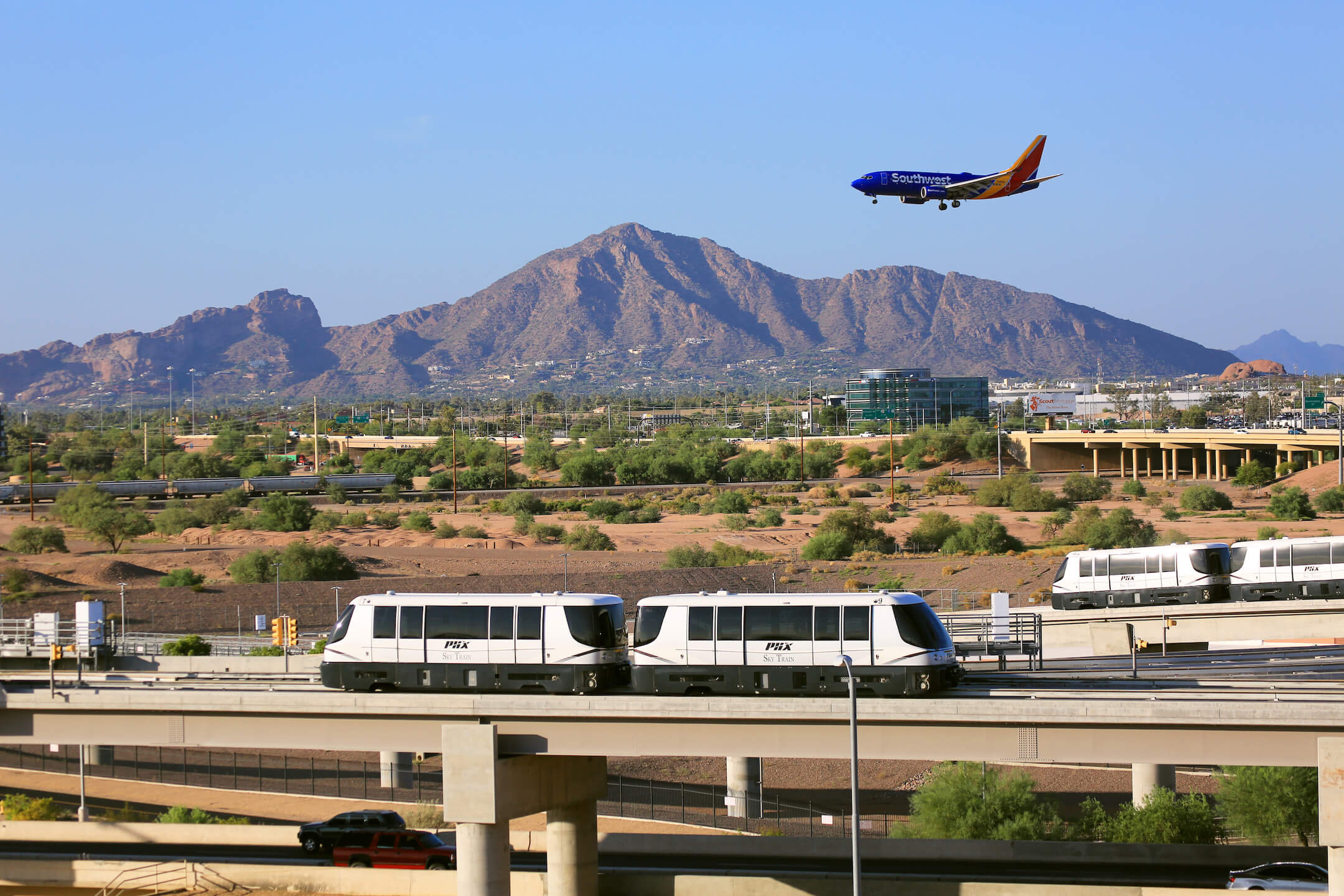 For many travelers, Sky Harbor International Airport is just a place they arrive at or depart from when they need to travel. Not much thought is given to the destination beyond what food is near their gate, or how much time they have to get through security.

But Phoenix Sky Harbor, which is one of the country’s largest commercial airports, is making an impact on much more than just travel plans.

The City of Phoenix Aviation Department states its mission as being, “committed to incorporating sustainability principles and practices into our operational, management, and administrative processes. Our vision is to have an informed workforce and engaged business partners that deliver a well-planned, accessible, and world class airport experience for our customers. Further, we demonstrate our environmental responsibility to our community as we strive to enhance local, regional, and national economic benefits from the Phoenix airports.”

Not only are nearly two-thirds of the Aviation Department’s vehicles already powered by clean energy or use low emissions technologies thanks to existing policies, but the department is also working with tenants at the airport to reduce emissions. Already it has set clean vehicle and emissions standards for the Department’s fleet vehicles and ground transportation providers, improved mass transit via Metro Rail through the new PHX Sky Trainâ, established a rideshare program, and reduced ground-based jet engine emissions by electrifying aircraft gates at Phoenix Sky Harbor and promoting single-engine aircraft taxiing practices for all commercial fights.

According to an update to its 2015 Sustainability Management Plan recently released by the Aviation Department, Greenhouse Gases (GHG) are down 5,450 tons in two years. And in 2016, Phoenix Sky Harbor was recognized through the Airport Carbon Accreditation Program for reducing GHG emissions. It is working toward carbon neutrality by 2050 for City-owned sources.

“PHX joined in 2016 showing a reduction in its carbon footprint for both 2014 and 2015, year over year. The Airport Carbon Accreditation Program is a voluntary initiative for airports that want to demonstrate their commitment to doing their part to reduce global warming and climate change,” Shelbrack says.

In 2015, Phoenix Sky Harbor was awarded a million dollars as part of the Federal Aviation Administration’s Voluntary Airport Low Emission (VALE) environmental grant program. The grant helped reduce emissions at the airport by funding the development of electric charging infrastructure to support the replacement of diesel-powered airline ground service equipment (GSE) with electric. Through the grant, PHX was able to install 28 electric charging stations around Terminal 4 and convert numerous bag tractors.

Also, in Sept. 2019, according to a news release, “Airports Council International (ACI) accepted the renewal of Phoenix Sky Harbor International Airport’s Level 2 Reduction in the Airport Carbon Accreditation program, which recognized achievements for two years and further reduction in the airport’s carbon footprint.”

Since 2014, the Airport has reduced its carbon footprint by 25% and currently, 90% of Sky Harbor’s Level 2 carbon footprint for airport-owned buildings and activities is from the use of electricity. The remaining 10% is from fleet fuels.

Air conditioning, lights, escalators, baggage conveyors—and so much more. Keeping an airport running requires extensive energy use. The Department recognizes this, but wants to reduce its usage as much as possible.

To do so, various initiatives will be and have been implemented. The lighting throughout both the garage and terminal at Terminal 4 is being converted to an LED system, which will save approximately 60% of energy. The air conditioning in that terminal was also updated and optimized. Solar panels were installed to harvest solar power, and additional solar on top of the parking garage is currently being installed and scheduled to be completed this December.

“When the modernization efforts of Terminal 3 are complete in 2020, Terminal 2 will close,” explains Shelbrack.

Those traveling through the terminals have probably noticed the recycling bins placed out for garbage. Currently the recycle and landfill compartments are being utilized, with plans to later utilize the third compartment for composting.

Consumer education posters—developed by the Facilities and Services team in conjunction with the staff from Public Relations—hang above the bins, providing information as well as fun facts.

Cardboard recycling containers (located at the docks) are available for use for all airline, concessions and cargo tenants, and the Arizona National Guard, and cardboard containers are also utilized by City of Phoenix Aviation Department staff.

Terminal 3 South, which opened in January 2019, has compactors with chutes.

In the original Sustainability Management Plan, a stated goal was to “achieve 40% waste diversion by 2020 at Phoenix Sky Harbor, Phoenix Deer Valley, and Phoenix Goodyear airports.”

Other waste reduction efforts have included recycling and reusing asphalt and construction waste and developing innovative solutions for recycling runway rubber waste, amongst others.

Conserving water in the desert is always a priority, and one that PHX takes seriously, as well.

The Department had committed to making a 10% reduction of its water use by 2020. So far, there have been installations of low-flow plumbing fixtures; automatic shutoff valves in public restrooms; and the addition of low-irrigation, xeriscape landscaping.

In fact, the landscaping updates have allowed for a 30% reduction in landscape water usage since 2012.

In June 2019, a turf replacement and landscaping project was completed. It replaced the green grass turf with native desert landscape—such as low-water-use trees, cacti, and accent plants for ground cover—a move that is anticipated to save $400,000 annually in labor and materials, as well as millions of gallons of water.

“In a desert city like Phoenix, every drop counts,” says Phoenix Water Services Director Kathryn Sorensen. “By making the switch to xeriscape, Phoenix Sky Harbor is not only honoring our city’s native landscapes, but also significantly reducing its water use.”

PHX is committed to sustainability in all facets of its operation, and that includes policies and contracts. As it notes in its Sustainability Management Plan, “Policies guide the Aviation Department’s business decisions and affect everything from capital improvements to purchasing supplies used for day- to-day airport operations. Contracts are the means by which the Aviation Department can both promote and coordinate sustainability efforts with its suppliers, tenants, and other business partners.”

For example, the Department incorporates sustainability into its construction activities by using LEED certification requirements for building construction projects, tracks the purchase of environmentally preferred products, and reduces construction waste.

For outreach services, the Aviation Department conducted noise mitigation outreach to neighborhoods, of which it reached its noise reduction goals in 2016; has implemented numerous community programs, including speakers, airport programs, partnering with schools to bring real-world airport applications of STEM (Science, Technology, Engineering and Math); and more.