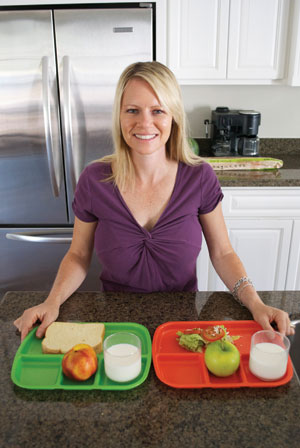 As the school year rolls around, parents, grandparents and care-givers scramble to get kids ready for the new school year and figure out, “What will I pack them for lunch?” Parents have to balance feeding their kids a healthy lunch with managing how much of that lunch could be wasted – a complication that has come to the forefront with a growing environmental focus.

The average household still throws out about 400 pounds of food a year, despite the financial challenges of the last few years. With the start of the new school year upon us, many schools, organizations and parents are looking at how school lunches contribute to this excess food waste.

As a parent, kids wasting food may not be breaking news to you, but the amount of wasted food in school cafeterias and how it affects the environment might surprise you.

The Environmental Protection Agency (EPA) estimates that about 13.9 percent of total waste in landfills is food – in 2010, an estimated 33 million tons was discarded. According to LeanPath.com, schools and families generate much of the wasted food that ends up in our landfills, with households contributing about 25 percent of food waste, K-6 schools producing about 45 percent, and middle and high schools at 31 percent.

Recently, The Wall Street Journal reported that people in wealthier countries, including the U.S., overbuy and subsequently end up throwing out food because it goes bad. What and how much we Americans throw out has been documented for years by the late Dr. William Rathje, director of the Garbage Project at the University of Arizona (U of A). He and his team of researchers studied America’s trash habits for more than thirty years, noting that food waste and its consequences mostly go unnoticed because the belief is that “food doesn’t pile up, it just goes away.”

This isn’t the case.

In the last 48 years, tossed-out food scraps have risen from 12,200 tons in 1960 to 31,790 tons in 2008, with schools contributing in large amounts, according to WastedFood.com. Almost 80 percent of school waste could be diverted from landfills, notes Jonathan Bloom, author of “American Wasteland: How America Throws Away Half its Food and What We Can Do About It”. As daunting as this data appears, positive changes are being made.

“This fantastic endeavor succeeded because of the vision, collaboration and dedication of the workers, parents, and school professionals,” said New York City Council Member Gale A. Brewer, at a June 19 awards ceremony honoring NYC Department Of Education (DOE) custodial, office of School Food and teaching staffs who were involved in the pilot, according to a statement from the school district.

Start at home
Vegetables seem to be the first casualty when it comes to being thrown away. Because they are fragile, veggies and fruits have a short shelf life. Now, this may create a conundrum since fruits and vegetables are an important part of a healthy diet. Today’s growing kids need these nutrient-rich foods, maybe now more than ever, so the key is in planning, preparing, and knowing what your kids like.

Smaller portions reduce food waste, so keep portions on the small side. The best rule of thumb, or fist, for portion size, is to use your child’s closed fist as a guide. By example, buy the smaller apples and oranges – saving you money at the check-out. Then, rather than packing a whole apple, slice one up and split it between your kids’ lunches. Kids are more likely to eat small slices than a large piece of fruit. By divvying it up between kids, or saving half for later, you’ll be able to buy less, which means you’ll also spend and waste less.

Plan, plan, plan
One of the easiest ways to save on waste and money is to plan out your meals for the week and find recipes that will do double duty, like roasted chicken – use the leftovers for the next day’s chicken sandwiches or chicken salad. Maybe even chicken soup or tacos…you get the point. Rethinking how we plan meals is a big step in reducing food waste, as well as saving money.

The grocery store is an easy place to make impulsive buys or pick up more than needed, and could mean more perishables will go to waste. Start making a list of what you need for your meals. If needed, enlist the help of some websites or smart phone apps to keep you on track.

Start at the cafeteria
Little tummies need little portions. Schools, kitchens, and cafeterias can minimize disposal and food costs by putting into place waste prevention procedures such as the ones below:

Offer vs. Serve
Give students the option to “take” what they want instead of being “served” what is offered. Schools that are implementing this strategy are seeing a reduction in food waste. Some schools have opted to go “tray-less” altogether, which means students take only what they can carry. They are allowed to return for seconds, but this system slows down the common practice of over-piling plates with food that won’t be eaten. This type of program also allows schools to meet federal nutritional standards for breakfasts and lunches, while offering students a “choice” of how much to take. This strategy reduces food waste by not making students take food that they don’t like or won’t eat.

Zero-Waste Lunches
Waste is avoided by reducing or eliminating any extraneous packaging. At home, you can start by packing up food in reusable wraps, containers and bottles. When careful planning is used, little or no food or garbage will end up in the landfill. This type of program does mean there will be some extra planning and forethought but, overall, the results are tremendous and have a high payout with regards to the environment and the school’s bottom line.

To begin a zero-waste program at your child’s school, one website, wastefreelunches.org, provides a guideline to help the volunteers and administrators get started. The EPA also provides educational literature and posters for schoolrooms.
Reducing school waste may seem overwhelming and daunting at first, but taking small bites (yes, pun intended) will eventually pay off.