How Liberty Wildlife Leads The Way in Local Conservation 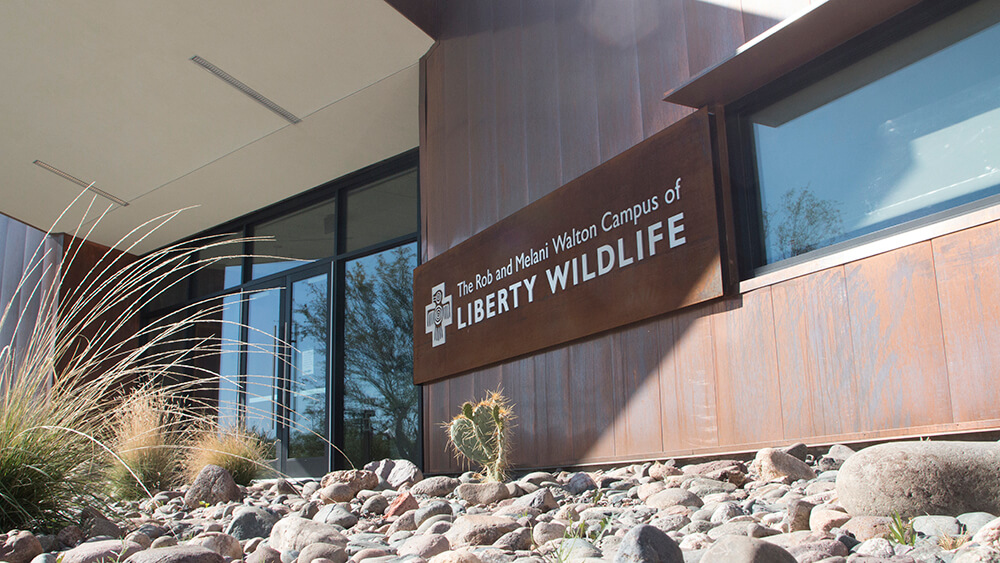 Liberty Wildlife is a local non-profit organization whose mission is to solve conflict between humans and wildlife through the rescue and rehabilitation of injured wildlife, education of the public and conservation. From humble roots, they are now a shining example of what true conservation can be.

The organization was housed initially on founder and lead veterinarian Dr. Kathy Orr’s property in Scottsdale, AZ. She was one of the few local veterinarians qualified to care for wounded wild animals. Word spread and soon Dr. Orr was the go-to veterinarian for these animals, with many locals dropping off or helping transport the animals to new homes.

One local was Megan Mosby, now the foundation’s executive director, who also had a passion for raptors. The other was America West Airlines pilot Terry Stevens, currently director of operations for Liberty Wildlife. Working as a volunteer, Stevens convinced the airline to let him transport a wayward pelican back to San Diego. Between Orr’s and Mosby’s efforts, and the publicity of birds literally flying on the airline’s jets, Liberty Wildlife was born.

Since then, solely through donations and volunteerism, Liberty Wildlife’s wings have spread far and wide in the world of rehabilitation, education, research, conservation, sustainability, and community outreach.

In 1981, their first year, they saw 85 animals, according to company archives. “They treated nearly 10,000 animals last year,” Stevens says of 2018, with a historical release rate of over 50 percent. The primary goal is to rehabilitate and release. When an animal is healthy but unable to return to the wild, they are placed with zoos, nature centers, breeding facilities or become foster parents for their species. According to records, the organization has had a profound impact on over 65,000 animals. 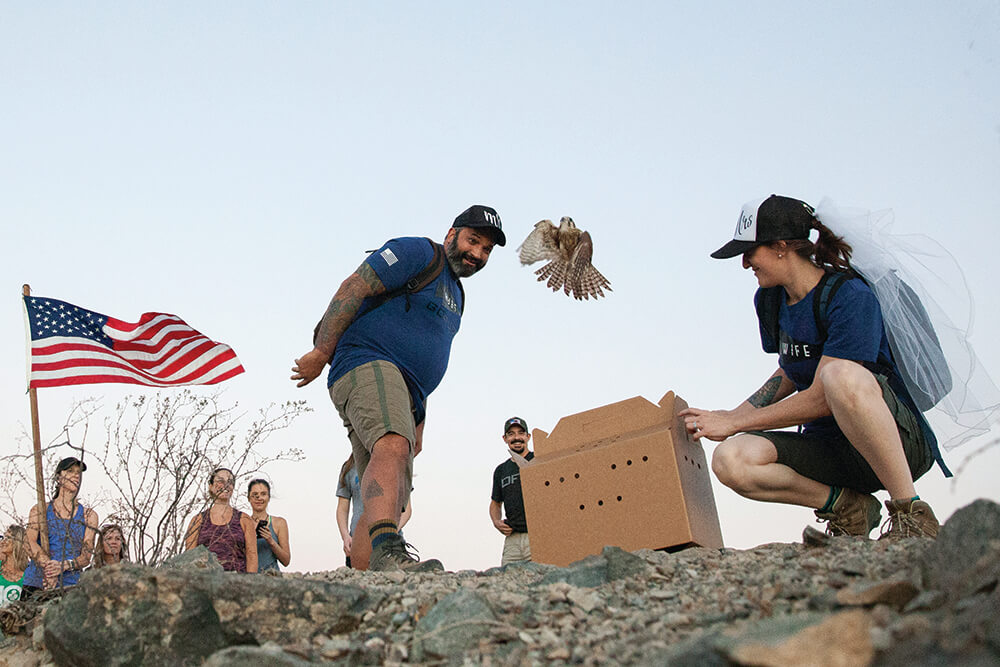 “It’s important because these animals are part of our ecosystem, and they don’t have the luxury of being taken to the vet when they’ve been hurt or injured. So Liberty Wildlife fulfills that need and allows animals a safe haven to recover and hopefully return to their natural environment,” Stevens says. Others are given a unique role as an educational ambassador.

Education Improves the Health of Humans and Wildlife

Part of the educational program is teaching children to live in harmony with nature. Liberty Wildlife’s commitment to environmental education provides over 700 programs a year to students throughout Arizona. The program follows the model of the No Child Left Inside Act of 2008 and works to give children raised in urban environments the chance to interact with wildlife and thus learn to respect nature and wildlife.

Numerous studies link obesity and behavioral issues to a sedentary lifestyle. As the lack of access to nature areas in urban areas grows, so does the sedentary lifestyle. The barriers to experiencing nature also increase the fear of it, which leads to a lack of respect for wildlife and their habitats. “Learn as much as possible, and respect it,” says Mosby of nature and its inhabitants.

Stevens agrees. “Most of the damage we see is human-related,” he says of the wild animals brought to the facility. “Teaching others how to care for these wild animals when they can’t care for themselves and helping people learn to change the behaviors that cause the animals harm is extremely rewarding,” he continues. Although Stevens has retired from flying, he says he’s working now more than he ever did as a pilot and loves his role as an educator, helping kids learn about the importance of these wild animals and having compassion for animals and the world we all share.

Organizations such as ADOT, APS, Freeport McMoRan, MCDOT, and SRP are among the many that interact with wildlife and work with Liberty Wildlife to preserve and protect Arizona’s natural habitats.

Liberty Wildlife assists in wildlife protection plans to help reduce human and wildlife conflicts, and importantly to utilities, reduce the occurrence of accidental electrocution of avians and other animals by contact with overhead electrical wires.

The impact Liberty Wildlife has made on the utility world in Arizona over the last few decades is profound. Liberty Wildlife has been a crucial partner in APS’s conservation efforts, says Nicole Rodriguez, Natural Resource Specialist for APS, via email, “It’s not just APS that benefits from their expertise; they assist many other utilities in Arizona as well.” 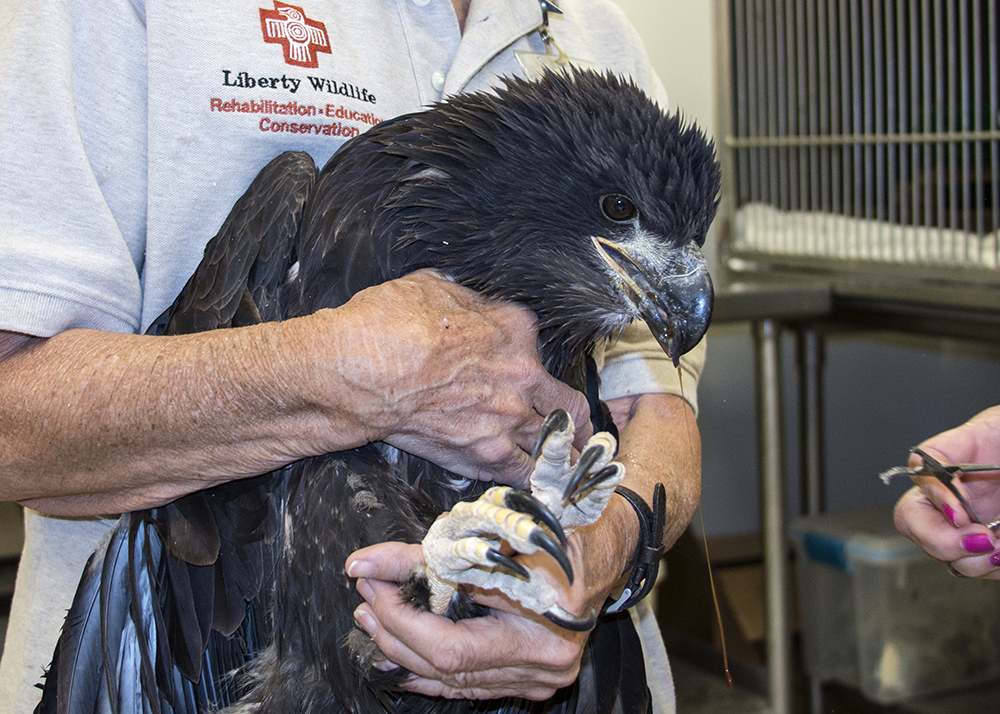 In October of 2010, Liberty Wildlife and the U.S. Fish and Wildlife Service began a feather repository and distribution program to collect, store, catalog and disseminate feathers and other bird parts to legally recognized tribal members for use in tribal ceremonies. According to Mosby, it was once illegal for Native Americans to obtain these items for their cultural and religious practices, and oftentimes they would go to the black market to get them.

Liberty Wildlife’s new facility in south Phoenix is a far cry from its early days in Dr. Orr’s backyard, but still completely in line with its conservation mission. The facility was built to operate in as small a footprint as possible, from reclaiming a former gravel pit, to achieving a LEED Platinum rating. “I’m very proud of not just the work we do, but the impact we have on the property,” Mosby says. The property uses a water catchment system for runoff water for the desert landscape. Solar panels allow them to make nearly 90 percent of their power, and charging stations are available for electric cars. “We tried very, very, very hard to make a small footprint on the environment and the property. It all works together; you can’t take any piece out of it,” Mosby adds.

For more information about Liberty Wildlife and how to help, visit libertywildlife.org.

Barbi Walker-Walsh is a freelance journalist and veteran flight attendant with a serious case of wanderlust. When she’s not globetrotting her family around the world, she can be found geeking out over food, fitness and fashion at home.