The Pigeon Paradox, as described by Dr. John Weser, executive director of the Center for Native & Urban Wildlife, and originally posited by Dunn et al. (2006), points out that: “People are more likely to take conservation action when they have direct experiences in the natural world, and as conservation efforts shift to cities, people primarily experience nature through contact with urban nature. Therefore, to better support future conservation efforts, it will depend increasingly on people’s interactions with urban ecosystems.”

That’s a foundational philosophy at the Center for Native and Urban Wildlife (CNUW), a division of the biology department at Scottsdale Community College (SCC). Since 2000, the team at CNUW has made it their mission to teach students and the community at large about conservation biology, and the incredible biodiversity of the Sonoran Desert within an urban environment like Scottsdale. 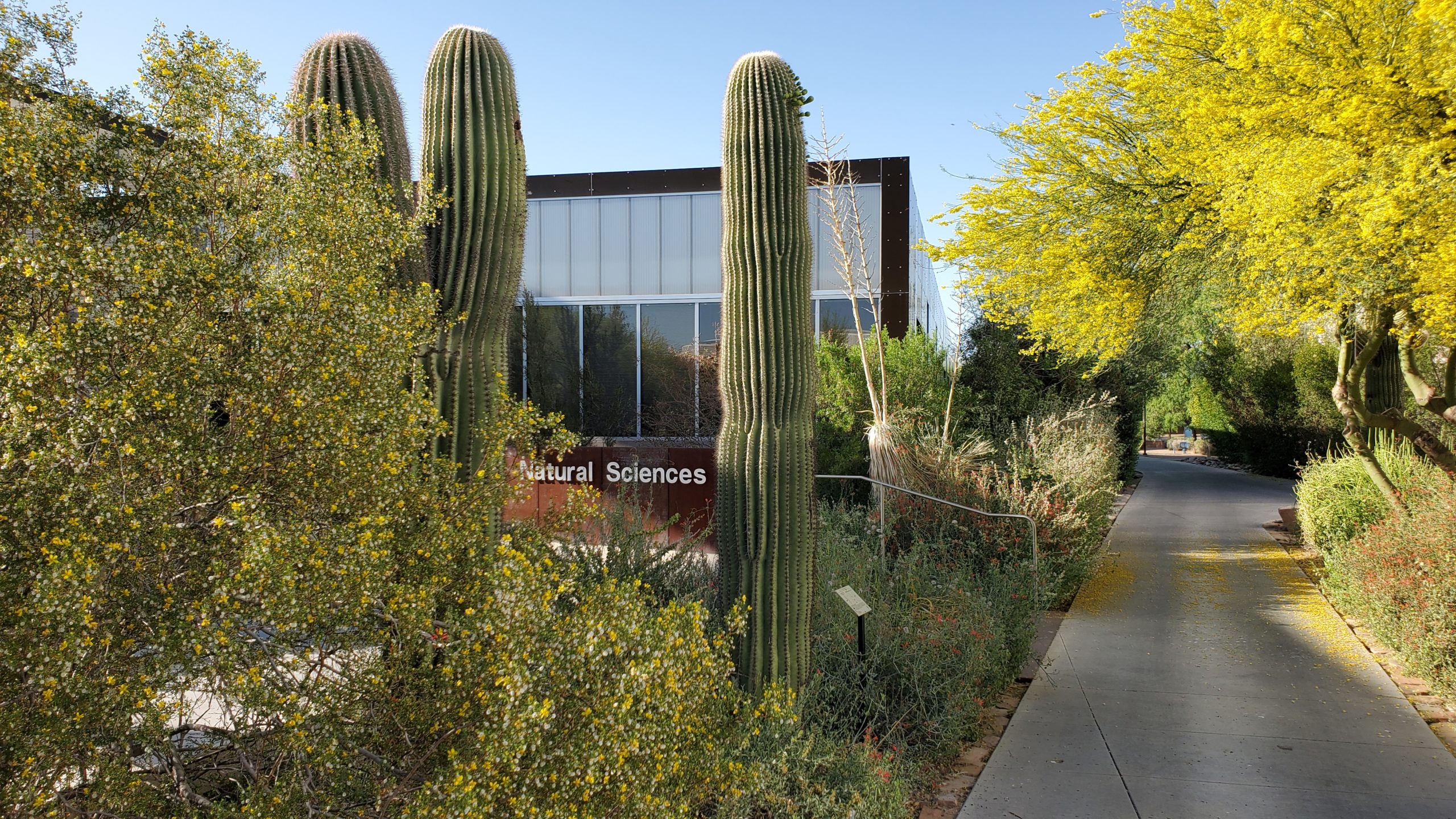 The SCC campus serves as a refuge for several threatened and endangered species. These include fish like the desert pupfish and Gila topminnow, plants like the Huachuca water umbel and Arizona eryngo (members of the carrot family), and even some of Arizona’s signature protected species like the desert tortoise and Gila monster. CNUW uses these “ambassadors” to further connect people with nature through direct interactions.

To support these and other species, CNUW intentionally and actively uses “wildscaping” at SCC’s campus, which “promotes using native plants whenever possible to support and attract native wildlife,” says Natalie Case, education programs developer at CNUW. “The idea is that our native wildlife are already adapted to and attracted by native plants…The campus has become our wildlife demonstration garden. It’s more than that—it’s an outdoor classroom; a living classroom.”

That classroom has become a beacon of biodiversity to over 35,000 elementary school students since CNUW’s community education outreach program began in 2002. SCC students who participate in CNUW’s conservation efforts are encouraged to lead these field trips, which introduce 4th-graders to the basics of biodiversity and the unique nature of the Sonoran Desert.

“The idea is that whenever you can communicate or teach a subject to someone, that’s when you learn it the best,” says Weser on the importance of students leading those tours.

Weser goes on to describe the variety of projects CNUW is involved in that provide students with firsthand experiences dealing with the unique challenges and attributes of our Sonoran Desert home. CNUW’s projects are as diverse as the animals and plants they study, and many recruit undergraduate students who would otherwise not have the opportunity for hands-on research until later in their academic careers. Those include:

It’s not only elementary school students visiting SCC either, as the commitment to wildscaping coupled with the campus’s unique location in Phoenix has made it a bird-watching hotspot, with over 140 species of visiting birds.

Case reiterates the importance of fauna-focused pruning, pointing out that by rejecting more aesthetically focused landscaping—which would prune away the thick and lush understory vegetation that many birds need for cover—plants are left wilder to better suit the needs of the animals.

Like everything else, CNUW faced pandemic-posed challenges throughout 2020. Case remembers the early days of the pandemic when it was unclear if staff would be allowed on campus to care for the animals, and the team frantically delegated who would be taking chuckwallas and tarantulas home with them. 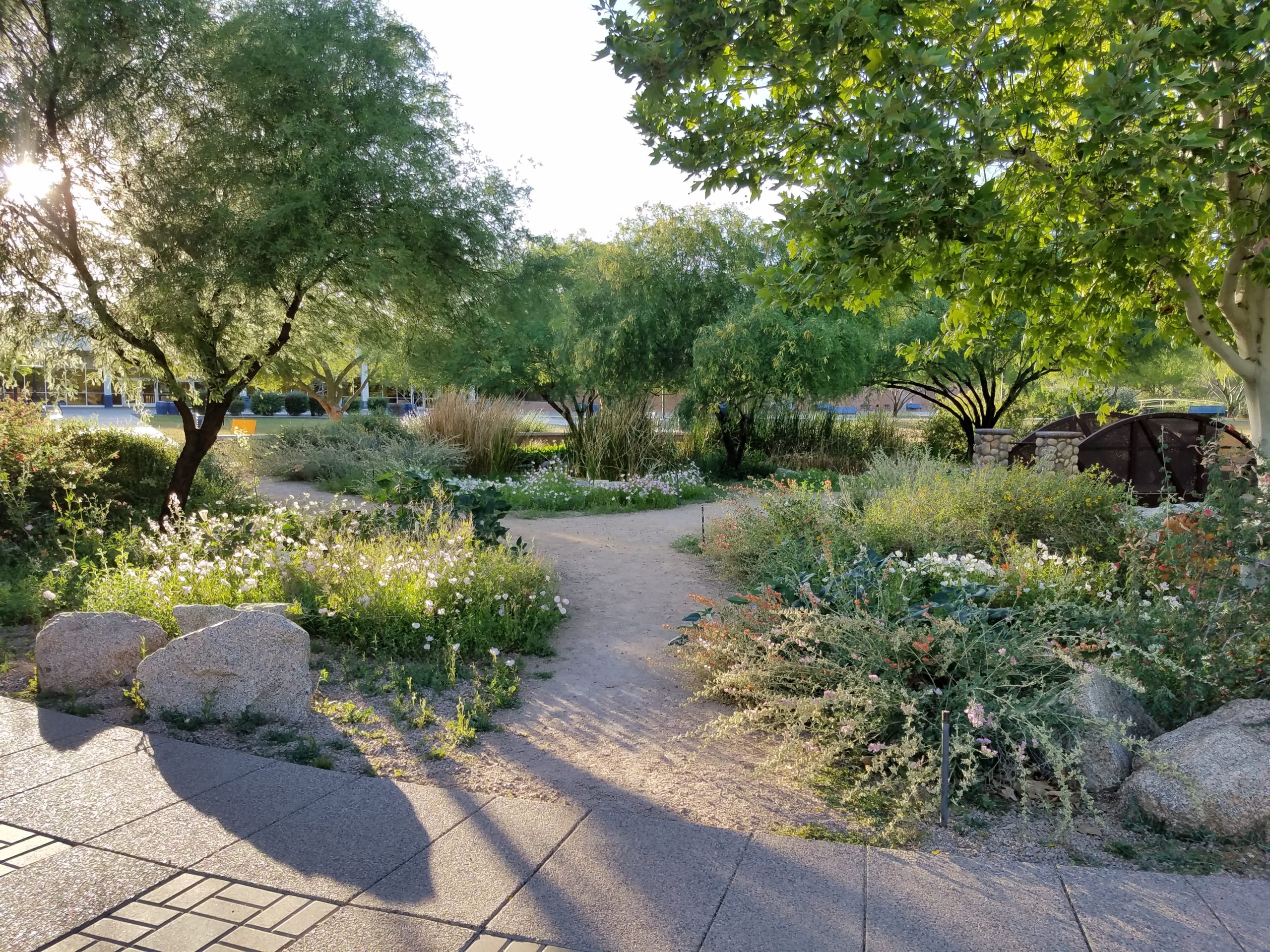 Fortunately, they were able to continue to attend to the needs of the campus’s plants and animals while following CDC guidelines, and Case says that with less foot traffic around campus, even more growth and diversity have thrived over the last year. That includes a surprising herd of cactus wrens and a kaleidoscope of Western monarch butterflies, the latter of which are quickly approaching endangerment.

Now, as a return to normalcy seems imminent, Case is looking forward to welcoming back students who she says have “been champing at the bit” to return and lend a hand. It will also mean they can re-start their community outreach programs and so continue their mission of educating Phoenicians and protecting the wildlife we share our home with.

To learn more about how you can take part in CNUW’s numerous programs, visit https://cnuw.scottsdalecc.edu/.

After all, urban biodiversity is about much more than pigeons.

Note: There is no relation between the author of this article and the co-author of “The Pigeon Paradox: Dependence of Global Conservation on Urban Nature,” Robert R. Dunn.