The Cosanti Foundation’s new exhibition educates the public on how architecture and ecology combine.

The famous Dome House, located in Cave Creek, Arizona, is a perfect example of using architecture in a way that also takes other organisms and the surroundings into account. In fact, there’s even a word for it: arcology, a combination of the words architecture and ecology. It’s a principle that offers an alternative to urban sprawl and a possible solution to modern climate and cultural crises alike. Now, visitors to the Burton Barr Central Library in Phoenix can explore these connections through a free exhibition, “The Architecture of Possibility,” organized by The Cosanti Foundation’s Assistant Curator, Noémie Despland-Lichtert.

The project that would become Dome House began in 1948 when East Coast heiress Leonora Woods purchased land in the middle of the Sonoran Desert. Her dream was to build a house where she could sleep under the stars. She initially asked Frank Lloyd Wright to design it, but he was unavailable to take on the project. Woods eventually hired architects Mark Mills and Paolo Solerim, both apprentices of Frank Lloyd Wrig

ht. The following year, in 1949, she and her daughter, Colly, and the two architects collaborated on Dome House while camping onsite. The house was completed in 1950, but, prior to the completion, Paolo and Colly, who had fallen in love while working on the house, married and moved to Italy. Woods continued to live in Dome House until 1984, and, since then, it has been occupied by architects and artists.

What makes Dome House so special, however, is that it was ahead of its time. “Dome House exhibits design values and techniques such as passive solar technology, the use of dome and apse shapes, creative reuse of industrial materials, incorporation of onsite natural materials and earth-casting techniques, responsiveness to geographical place (in this case, the Arizona desert), connection to both the sun and stars, and minimum disturbance to the surrounding ecology,” says Kate Bemesderfer, The Cosanti Foundation’s senior director of development and communication. These are all principles used at ever-increasing scales, first at Cosanti (Soleri’s residence until his death in 2013; now a gallery) and then at Arcosanti (an experimental town in central Arizona’s Yavapai County developed by The Cosanti Foundation showing arcology in action)—and they are just as applicable today, both in Arizona and around the world.

Dome House, which sits at an elevation of 2,500 feet, was designed to adapt to the extreme weather conditions of the Sonoran Desert. With cold nights and extremely high temperatures during the day, the house needed to adapt to the changing environment—all while offering a comfortable environment for its inhabitants.

For starters, Dome House uses desert masonry, which is a combination of rock and concrete wall construction first developed by Frank Lloyd Wright. This cost-effective construction technique uses local rock directly derived from the site and a limited amount of concrete. “During construction, rocks are covered with paper and installed inside the formwork (the mold in which concrete is poured),” Despland-Lichtert says. “The rocks are then covered in concrete, and, once the wall has set, the formwork and the paper are removed to reveal the desert masonry wall.”

While the actual dome is the most iconic aspect of Dome House, it is also the element that has been most transformed over the years. Originally, half of the dome could be opened and closed by pivoting and sliding along a track. However, the mechanism was hard to maneuver and was eventually disabled.

“The dome, itself, is composed of metal beams reclaimed from decommissioned planes after World War II,” Despland-Lichtert says. “This is an example of elegant frugality—the idea of reusing, recycling, and repurposing objects and materials toward new uses. In the summer, the dome would also be covered with screens from military surplus.

“In later years, the updated dome would be shaded with a bamboo structure,” Despland-Lichtert continues. “The updated version of the dome also included the addition of an evaporative cooler system that allowed for more comfort during the hot summer days.”

Despite the use of energy-efficient passive solar strategies, Dome House has not been immune to the effects of climate change. “Today, heaters are sometimes needed in the winter, and air conditioners in the summer, in order for the house to be livable,” Despland-Lichtert says. “In this sense, Dome House is similar to other houses of the region, although it only requires a fraction of the energy of its neighboring homes. Because of its small scale and design, the house invites inhabitants to be aware of the landscape and live in synergy with the seasons.” 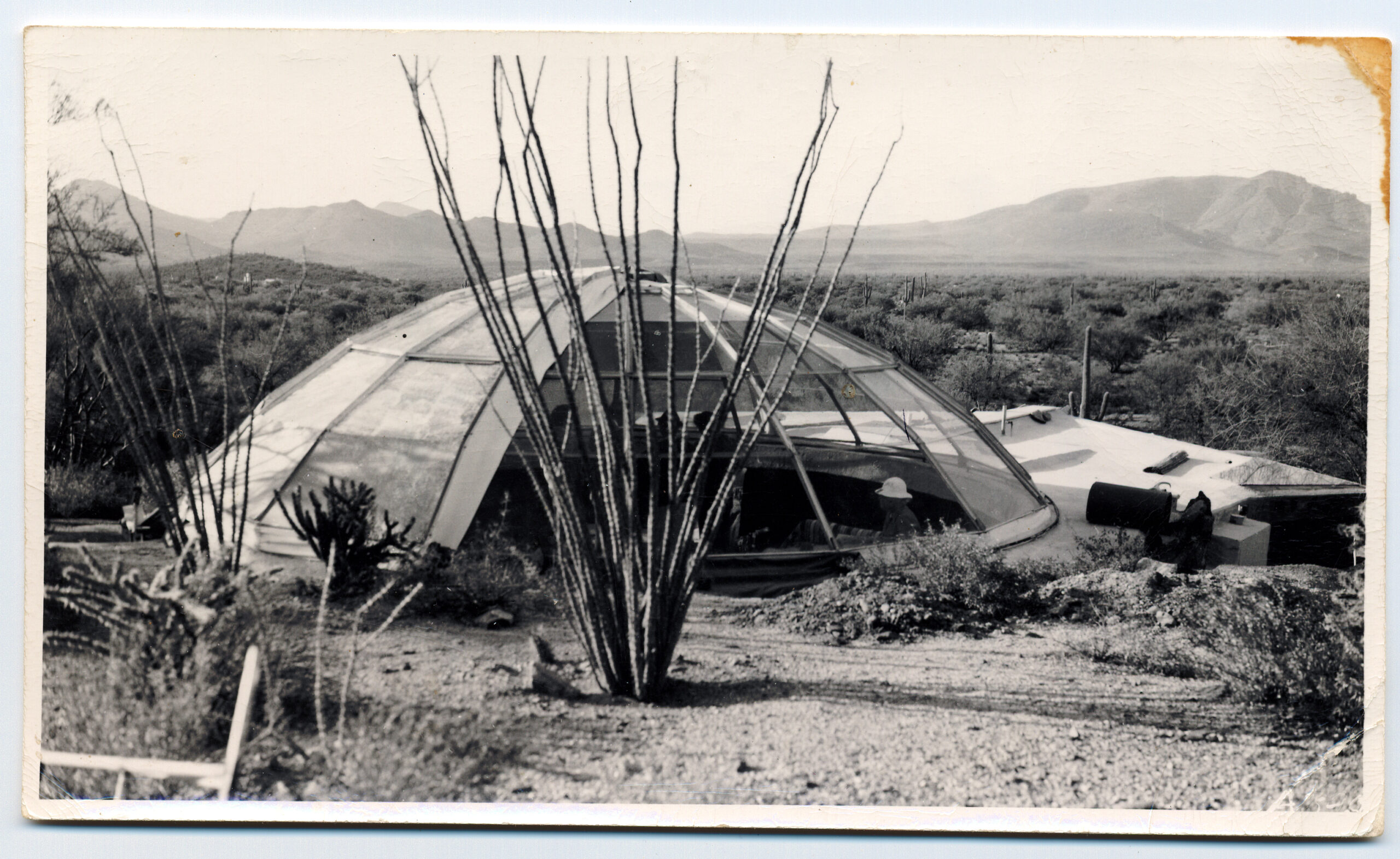 The Architecture of Possibility

One of the primary purposes of the exhibition is to reintroduce the public to The Cosanti Foundation and the idea of arcology. “We are looking back at the history of arcology in order to encourage more and more people to look forward to its future uses,” Bemesderfer says.

Throughout the exhibition, visitors will learn more about Dome House and the interweaving of arcology in its construction. “The Architecture of Possibility” includes free-standing informational panels with photos, drawings and text explaining the design, construction and use of Dome House and its context within Arizona architecture and arcology; a laser-cut model of Dome House that was created for an exhibition at the Cave Creek Museum in 2013; two cases of archival news clippings and brochures from throughout Dome House’s history; and the library’s own collection of related books and materials, including the Act One Culture Pass for Arcosanti, which can be checked out by anyone with a Phoenix Library Card.

According to Bemesderfer, this is an important exhibition for several reasons. “It’s the first local exhibition that The Cosanti Foundation, itself, has curated since our SMoCA exhibition in 2017-2018,” she says. “As an educational nonprofit, it’s important to The Cosanti Foundation that we reach broad and diverse audiences. By working in partnership with Phoenix Public Library, we are bringing the world of arcology to the public for free and as part of an important public institution that is accessible to millions of people.

“Dome House also is a private property (unlike Cosanti and Arcosanti, it is not owned by The Cosanti Foundation), so the only way most people are ever going to be able to see it is through exhibitions like this one, or by taking one of The Cosanti Foundation’s signature multi-week workshops,” Bemesderfer adds. “The story of arcology starts with Dome House, and it is our hope that this exhibition will ultimately be the first of a series that continues with exhibitions about Cosanti, Arcosanti, and the future of arcology.”

Yet another element of the exhibition is one that was already in place and will remain so  year-round. “Part of why the Arizona Room at the Burton Barr Central Library made sense as the location for this exhibition is because that space has, for decades, displayed large special assemblies of the bronze bells made by hand at Arcosanti and Cosanti,” Bemesderfer says. “Another reason Burton Barr made sense is that the library was designed by architect Will Bruder, an early alum of The Cosanti Foundation’s multi-week workshop program.”

Bemesderfer encourages visitors to check out the exhibition—and Cosanti and Arcosanti—in person. “The Cosanti Foundation’s current focus is on building international academic partnerships, re-establishing our agriculture and farm-to-table program at Arcosanti, maintaining and restoring the iconic architecture of both Cosanti and Arcosanti, and investing in infrastructure improvements that will open the door to long-awaited new construction,” she says. “At Arcosanti, we also have a public cafe and hiking trails. It’s even possible to stay overnight, enjoying everything from our unique mesa-side pool to the same Milky Way views that Nora Woods enjoyed from her home at Dome House 70 years ago.”