Celebrating Frank Lloyd Wright: Sustainable Before the Age of Sustainability 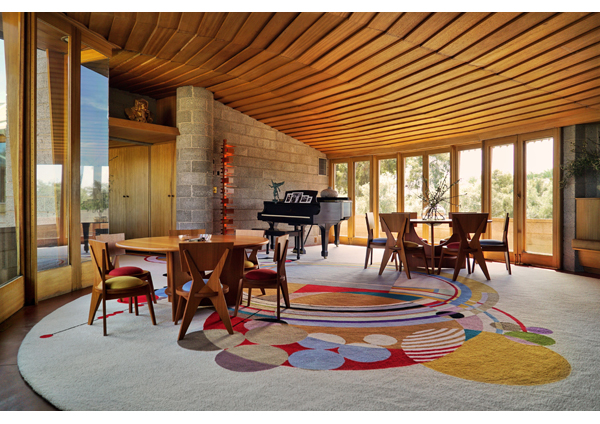 “I’ll remember Frank Lloyd Wright.
All of the nights we’d harmonize till dawn.”

We celebrate the 150th anniversary of the birth of Frank Lloyd Wright this year (1867−1959) in many ways, so inspiring is his song. From the early Prairie Style, exemplified by the masterpiece Robie House (1907) in Chicago, Illinois, through the later work in the Southwest such as Taliesin West (1937), a National Historic Landmark in Scottsdale, he affirmed a truly American architecture, reflecting the unique topographies of our national landscape.

We praise his innovativeness, too, such as audaciously building Fallingwater (1935) in western Pennsylvania for the Edgar J. Kaufmann family on a waterfall of Bear Run – a river rock becomes hearthstone – or designing the Guggenheim Museum (1959) in Manhattan as a spiral of galleries rather than in an angular array – a brush stroke, not a T-square.

He continues to ask us to see our buildings as part of the land, not apart from it, and to build our cities as people-centric organisms, not networks for cars. His legacy is one of innovation such as using new materials represented here in Arizona by his signature textile blocks at the Biltmore Hotel (1927) in Phoenix, for which he was a consultant to student Albert Chase MacArthur.

We honor him as well for his practical Usonian Homes, conceived for those who – like the Robies, the Kaufmanns or the Prices, winter residents in Paradise Valley – didn’t have the finances to contract with a world-famous architect for their homes. In the Valley, the Raymond Carlson Home (1950), built for the first editor of Arizona Highways, represents a Wright custom on a budget.

America’s greatest architect can also be lauded for pioneering ideas that helped promote today’s sustainable thinking, even though he would not have thought himself an environmentalist intent on world-saving.

“As far as I am aware, sustainability was not part of the lexicon of Wright’s day and age, nor a conscious element of his practice, at least not as we would describe or define it today,” said Ron Jones, sustainability advocate, co-founder and president of Green Builder Media in Lake City, Colorado. “He was able to see the inextricable relationship between the natural world, often in minute detail, and the built environment through a fresh lens that provided an ongoing interpretation of not only the aesthetic beauty of nature’s elements but also the subtle structural nuances they offered to only the keen observer,” Jones continued.

His “organic architecture,” prescribing these natural/synthetic connections, has offered today’s designers and builders “a raised platform of awareness that evolved into what we now describe as ‘sustainable.’ In a sense, his most important and lasting contribution to sustainability is expressed in the abstract,” added Jones, who spent time at Taliesin in Wisconsin with one of Wright’s apprentices, the late Charles Montooth, as well as with John Rattenbury at Taliesin West in Scottsdale.

“Frank Lloyd Wright was deeply influenced by nature in everything he did. He called nature his church, and frequently spelled it with a capital ‘N’,” said Jeff Goodman, director of Marketing and Communication for the Frank Lloyd Wright Foundation.

Architecture should respect and enhance the natural environment. “He did everything with intention and was extremely thoughtful about how his work would affect the site on which it would be built. During his lifetime, Wright carefully selected materials and was always acutely aware of the impact his work had on the land he considered sacred,” Goodman added. “I guess you could say this made him a pioneer in sustainable practices.”

A century and a half after his birth on a farm in Richland Center – on June 8, 1867 – Wright asks us to continue to rethink the relationship between the human-built and the natural world.

“He was from a family of farmers, so he was born with that sense of Midwestern resourcefulness that made buildings work well because they had to,” said Victor Sidy, AIA LEED AP, dean of the Frank Lloyd Wright School of Architecture, 2005−2015, at Taliesin West, and now principal of Victor Sidy Architect in Phoenix. He is coordinating the effort to renovate the David Wright Home (1952) in Arcadia, designed for the architect’s fourth child and precursor of the Guggenheim.

Structures should be indigenous to place, interacting with the site and, if possible, using materials nearby for the construction. Hence, at Taliesin West, onsite schist forms the walls instead of bricks or blocks trucked in from miles away. Today, of course, the LEED certification for construction rewards credits for building with as many local materials as possible.

More forgiving than the harsh Midwest, the desert allowed Frank Lloyd Wright to celebrate shade and other passive cooling methods that are today highly promoted because they save energy and reduce pollution. At Taliesin West, for example, the breezeway provides cool afternoon breezes, rising up from the Valley, to pass through the building without energy costs. At the Price House (1955), probably the finest of the handful of homes Wright designed in Arizona, he created an atrium with decorative flaps built by his associate, Eugene Masselink, which can be opened for natural breezes from the Phoenix Mountains.

“The essence of Wright’s lifetime body of work…was his ability to have a project result in an undeniable ‘sense of place,’” Jones said. “Even today, when one experiences a Wright building it is with that intuitive sense that it belongs exactly where it is and nowhere else, as if it grew from the landscape, that it had always been there and just needed to be released from the landform.”

Sustainability isn’t just sticks and bricks themselves but about relationships, essential to today’s environmentalism: “His buildings make us want to preserve them, to protect them, to keep them safe as enduring examples of the highest expressions of the relationship between shelter and art,” said Jones.

For Wright, it was not so much saving the planet, nothing so monumental, Sidy said. “It was doing with as much as you can with as little as you have. It is the affirmation of the beauty of simple things.”

And that’s a sustainable notion, for sure.

Tour Taliesin West in Scottsdale for $1.50 in celebration of Frank Lloyd Wright’s 150th Birthday on June 8. For more information and updates, see franklloydwright.org.