Headquartered in Tucson, World View offers guests a unique view of the planet through innovative astro-tourism and remote sensing technology.

In 2014, computer scientist Alan Eustace, a senior vice president of engineering at Google at the time, broke the world record for the highest skydive and the longest free fall—falling for almost four and a half minutes and a distance of more than twenty-five miles. Donning a pressure suit, Eustace was tethered to a helium balloon for his ascent into the stratosphere. Seeing our planet from such a vantage point can instill what is known as an “overview effect”  –   seeing the planet as a whole.

It was World View and its team of experts that led Eustace to his record setting jump almost a decade ago. Founded in 2012, World View will soon offer individuals the opportunity to experience the overview effect and see our planet from a vantage point of 100,000 feet above Earth. World View’s stratospheric flights are powered by balloons similar to those used by Eustace, albeit with a much more comfortable capsule.

Witnessing the planet from a vantage point not achievable from walking its surface can bring about a new sense of understanding, empathy, and comprehension. “[It’s] something bigger than yourself…you see the earth without borders, without race, and ultimately it triggers a different kind of respect for the earth as a planet,” explains Ryan Hartman, CEO of World View. Astro-tourism is fairly new and outside of the field of awareness for many. A big part of this stems from its unaffordability. However, World View is hoping to broaden accessibility by offering flights for $50,000—still a sizable amount, but within reach of many.  Beyond the cost, Hartman explains that World View’s capsules offer a much gentler way to experience such a voyage. “It’s a way to experience space tourism where you’re not strapping yourself to a rocket and succumbing to 6 Gs to be able to experience a few minutes of viewing the earth, but rather a very gentle way to ascend and spend many hours [of] viewing our earth.”

The company is planning to build  seven spaceports located around the world— the “Seven Wonders of the World—stratospheric edition,” Hartman likes to call them. The U.S. Grand Canyon and the Australian Great Barrier Reef locations will be the first to launch public flights in 2024, with Serengeti, Kenya following in 2025; Aurora Borealis, Norway; Amazonia, Brazil; and the Giza Pyramids, Egypt in 2026; and finally the Great Wall of China, Mongolia in 2027.

Participants are asked to spend five days at or near the spaceport so launch can take place when the weather and time are most optimal. “Space tourism is about place, and it’s about time,” explains Hartman, referring to locations of its spaceports as well as the time invested in the endeavors surrounding them. Participants will tour, hike, and have meals in the area around the spaceport, getting to know the place from the ground before being suspended above it. “Creating an opportunity for people to connect to the earth and to have the opportunity to immerse themselves into the beauty and the fragility of our planet,” explains Hartman. 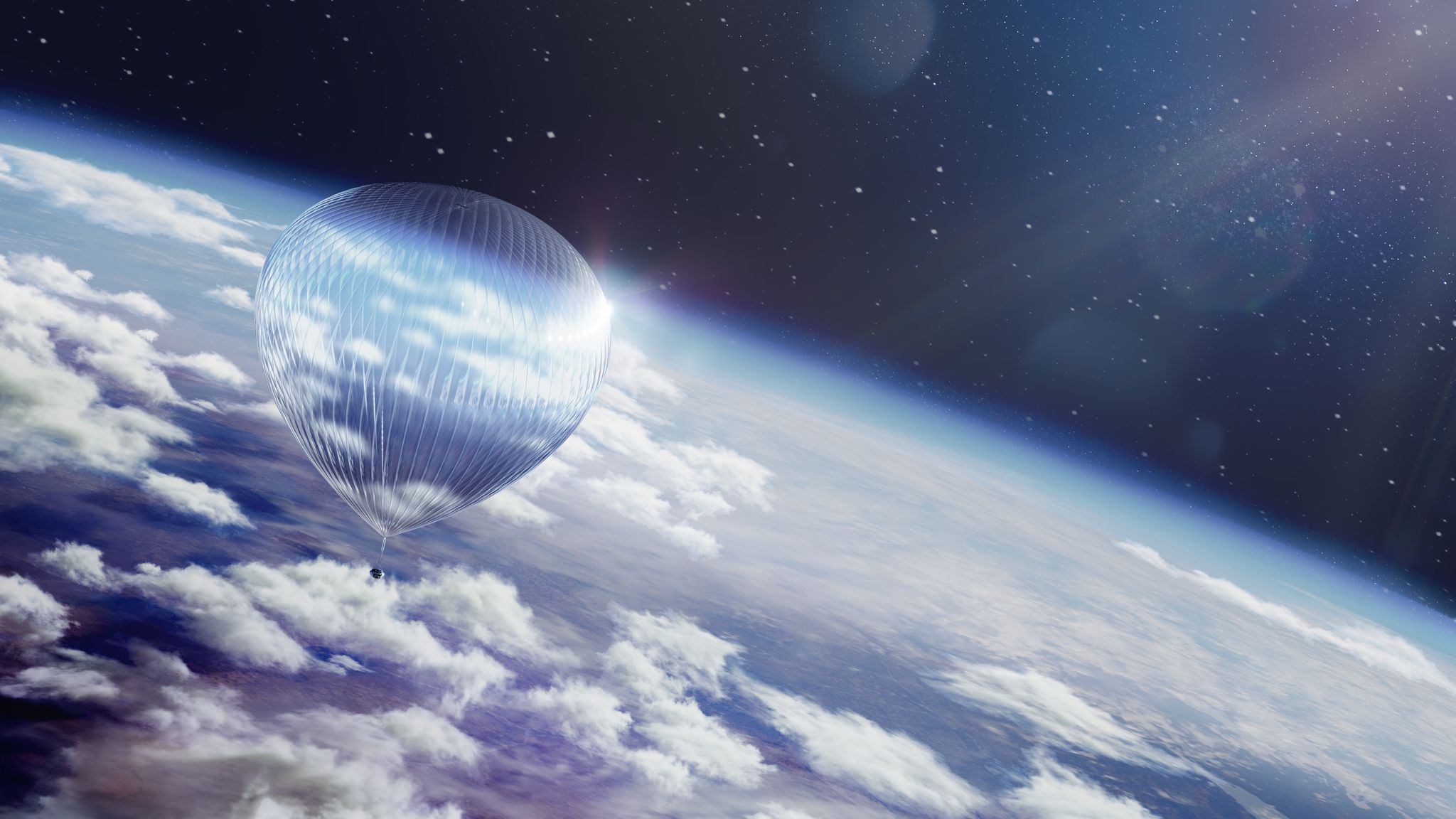 As for the space trip itself, participants board an explorer capsule amid early morning darkness and ascend while the sun is rising, which is seen through capsule windows. Each pressurized, climate controlled capsule is suspended beneath high altitude helium balloons and will offer occupancy for eight passengers and two crew members. The balloons are made of polyethylene plastic that are filled with helium that is non-flammable and non-explosive, along with backup parachutes as a redundancy to ensure passenger safety.

Passengers have their own seat within the capsule, along with an individual viewing screen. Windows on every side of the capsule allow passengers to peer out in every direction for a thousand plus miles. Approximately six to eight hours are spent exploring space before a gentle descent back to Earth.

The trip into the stratosphere will be carbon neutral, and the company is looking to do more for sustainability in the future. “One of the things that we’re working on is upcycling the balloons into a greenhouse. So if we can build a greenhouse or many greenhouses, we can be doing things like contributing to the growth of tree sapping in areas where there has been deforestation as a result of wildfires or overuse of forests, or potentially contributing to the growth of food in a more sustainable way,” says Hartman. The company aims to have a net positive impact on the environment and our planet’s future, and this is just one example of the way in which they hope to do so in the coming years. “We exist to inspire, create, and explore new perspectives for a radically improved future,” says Hartman.

Attempting to reach as many people as possible, World View’s journeys are offered to a wide range of ages and physical abilities, and with pricing as affordable as possible. “Essentially our thought process is that you use space tourism to create earth advocates, and by creating a critical mass of earth advocates you shift people’s behaviors,” explains Hartman.

In addition to astro-tourism offerings, World View also facilitates stratospheric remote sensing via helium powered balloons.  The company has completed 115 remote sensing flights to date. “It’s one thing to deliver an experience to a person, but you can also use the same technology to gather information, to gather data and create insights that are just as impactful. And for us, the idea that we can use our technology to ultimately contribute to a healing planet is what inspires us more than anything,” explains Hartman. In March, 2018, two Z-Class flights were launched out of the Tucson spaceport for NASA’s radiation detection experiments, Automated Radiation Measurements for Aerospace Safety (ARMAS) and a chip-based radiation sensor.

The company expects to have several flights a day throughout the year. Reservations require a $500 deposit and offer their customers flexible financing options to pay.