Are bothersome bugs crashing your outdoor party? Here are some tips to enjoy a pest-free summer.

There you are at a backyard summer social — the sky is painted with pink hues, dogs are running around greeting each individual guest, a plant-based burger sizzles softly as it hits the surface of the grill — when suddenly, a fly falls right into your freshly poured glass of punch. Reaching for a napkin, three more flies flee the snack table. Don’t be that host. We’re here to help you out with some life-saving pest control tips from a local expert on how to prevent unwanted guests at your outdoor parties.

With over a decade of experience working at his family’s 42-year-owned pest control business, Joe LaBrie has seen it all while providing solutions to individuals across the Valley. Leading the way for others through their Do-It-Yourself pest control service, Bug and Weed Mart, makes becoming your own exterminator easy.

“We have such a diverse climate in the state that there are a lot of things that people can do without the introduction of any products via chemical or non-chemical,” LaBrie says.

Summertime is especially difficult because, for many insects, it’s breeding season. However, there are several ways to take action against bugs invading your outdoor get-together, and it starts with some simple clean-up.

“Those kinds of gatherings often have our favorite pests around too, so controlling the dog waste and making sure that anything gets picked up pretty quickly will definitely deter flies from making further entries,” LaBrie says.

However, pets aren’t the only culprit for insect invasions, and the pick-up process doesn’t end with them. Collections of trash, woodpiles, twigs and disregarded objects make a great home for the creepy crawlers and sly stingers we all hate.

“If they’re just left from month to month, undoubtedly, they become harborages for those pests that will then find their way closer and closer to your back door,” says LaBrie.

Once the source of the issue is found, it can be easily solved with some strategic hands-on work. Clearing out clutter, tending to plants near or on the house, and designating spaces for smelly objects will have a powerful effect.

“If you’re composting, you’re inherently bringing lots of aromas of these organic materials into the environment that will be picked up on by interested parties,” LaBrie says. “If you’re composting, that’s great, but what we really recommend to people who do is have a pre-plan of how you’re going to have your bins off the ground, and elevation is paid attention to in terms of water drainage, and runoff and things like that.”

Following the clean-up phase, it’s time to plan your actual party. There are many things to consider when contemplating this topic, and oftentimes most people don’t account for pest control. With all of the food plates, drink glasses, trash bins, lights and frequented indoor-outdoor traffic, you might as well add insects to your invite list.

“The more things that you’re bringing out to attract the bugs, probably that many more little defenses you’re going to have to think about having during those key hot summer humid nights that are probably going to be the worst,” says LaBrie.

The savory wave of steam emanating from the meal and the sweet drippings from the drink station are most likely the main attraction for bugs of any kind—but don’t worry, you can take care of that, too.

“The other thing is thinking about where you position a punch bowl or the juice pouches or the things that have a high sugar content, like the bowl of watermelon—things that you and I can smell when we open the door, an insect is going to be able to smell sometimes up to 1,500 times more than we can, so those items become instant magnets,” LaBrie says. “At worst, keep them covered until the last minute when people are there with foil or Saran Wrap or something like that, and at best, just bring them out at the last moment.”

Of course, it’s not only the smells. Sometimes, it’s sight. Most insects have around two to five eyes, yet a single fly has 4,000 lenses in each eye, while a dragonfly has 30,000 lenses. With all of those additional spectacles, it’s no wonder they can see the glow of a phone screen from a mile away.

LaBrie offers a suggestion: “A lot of us have string lights—we’ve got tiki torches, we’ve got things that are kind of cool accent decorum that might attract bugs—so if those are not going to be able to be converted into pest bulbs, the next best option might be looking at appliances such as the Dynatrap, which is an electric-powered 24 hours a day, 365 days a year-running fan that has a UV light [which] attracts mosquitoes and a lot of other flying insects in that area to come to that spot.”

Aside from these mitigators, Bug and Weed Mart also offers multiple organic, non-toxic products as another option to really clear your space of pests. With over 500 products in-store, roughly 50 of them are entirely people-, pet- and environment-friendly.

“We have three different traps for flies that don’t use chemicals, and two of them rely on just water and bait,” LaBrie says. “Another one of those is decorative; it looks like a light fixture or wall sconce, and you see this beautiful glow on the front, but when you unplug it and flip it 180 degrees, you pull out this insert that is a glue trap for those little annoying gnats and fruit flies and things that are in the kitchen or bathroom certain times of the year.”

No gnats! Wouldn’t that be nice? And when you thought your outdoor experience couldn’t get any better, how about a non-chemical solution for controlling airborne bloodsuckers?

“[For mosquitoes], we sell two different products that look like dried-out small kernels of corn, but they are for mosquito larvae, which are typically found in old tires that people leave in the backyard or when a birdbath gets rain in it and stays stagnant, or the dishes underneath the plant pottery that collect [water]. So you can put these mosquito granules in there, and they will consume the larva. It’s fascinating, and it’s wonderful—it’s 100% green,” LaBrie explains.

Pest control always begins at the source, whether it’s stagnant water or woodpiles, and luckily there’s no need to worry about animals or children being harmed by these quick and safe fixes.

“On the pest control side [of the store], there are a number of either friendlier or flat-out organic products that are superb, that I would use first before chemical options,” LaBrie says. “We really embrace everything that is a non-chemical step to reduce a pest problem.”

Don’t let bothersome bugs crash your party. By taking a few precautions, you can ensure that spending time with your pals on the patio is a comforting, enjoyable experience without worrying about pests.

While spring is the perfect time for Arizonans to enjoy the beautiful outdoors, it can... 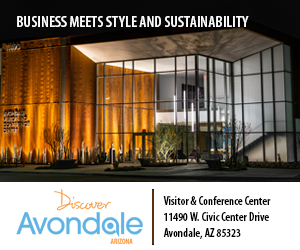