Life on the Rocks

Location, location, location: Sitting with nature, not against it, is a central element of today’s green building and LEED programs.
Masterfully placed amid the washes, ravines and boulders that characterize Fountain Hills, Jon and Teri Bernhard’s 3,950-square-foot, three-bedroom home was completed in January 2003 by Phoenix-based Chess Pacific Builders.

“This is a home that celebrates the character and spirit of desert life,” says Jon, AIA, designer, owner, and a partner in Scottsdale’s distinguished architectural firm, Swaback Partners, also the landscape design firm for his home, along with design affiliate, Studio V, which assisted with the interior.

“Teri and I didn’t want a home that stood out from the landscape. We wanted one that married itself seamlessly to its environment,” he said. Before designing their home, Jon walked the ridge site. The builder’s superintendent asked him at the prow of a large boulder: “You want to build a house . . . here?”

Appreciating this 1.5-acre site required a geologist’s love and an excavator’s vision, as the multi-ton, earthtone granite boulders lie on top of each other, some apparently precariously. One boulder, in the approach to the home from the parking area, is at least 90-feet-long and embedded deeply enough to intimidate a box of dynamite.

“The boulder outcroppings were extraordinary,” Jon said. “Placing a large home, pool and abundant outdoor living areas, and avoiding visible disturbance, proved to be a challenge.”

The couple moved to Fountain Hills in the early ‘90s because they liked its mountain views and the area’s signature topography of hills, arroyos and ravines — its wildness and ruggedness, its textures. They also appreciated the regular desert wildlife that surrounded the area, including bobcats, red-tail hawks and javelina families. 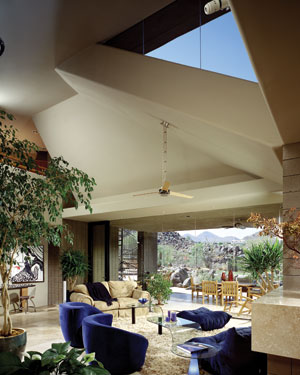 From the second-level rear terrace, the Bernhards enjoy boulders, hills, mountains and the landmark town fountain, which jets upwards to 560 feet. East views are dominated by the 7,000-foot Four Peaks mountain range, Red Mountain to the south, and the McDowell Mountains to the north.

“I started,” Jon recalled, “with an appreciation for the site. In fact, my primary goal was not to ruin the natural integrity of the site. Disturbance to the boulders and grades creates visible scars that significantly distract from the natural setting.”

To that end, Bernhard programmed terraces and steps to integrate with the site, avoiding walls and railings that would detract from the visual approach and experience of a home in the boulders. To further connect the home with the environment, he also called for the sloping rooflines to be copper-sheathed.

On the rear of the home, the swimming pool area was created by excavating the pool into the granite base. Bernhard designed a waterfall, moving boulders into place; elsewhere in the area and throughout the backyard, the rocks are used as accents.

“Most of the property is native Sonoran desert with other drought-tolerant landscaping, and the site is designed to take advantage of rain water and run-off for irrigation,” Bernhard says. “The majority of the site remains in native undisturbed condition, providing ideal views, privacy and a habitat for wildlife.”

Green before green was golden

The building orientation, the roofline/overhang design and the location of clerestory windows were placed to take advantage of natural day-lighting without glare or direct sun exposure, he explains.

“Jon designed the home to provide abundant indirect natural light in every room except the media room. The natural illumination and avoidance of direct sunlight really help out in the summers,” Teri said.
High-efficiency HVAC units powered by natural gas help keep the Bernhards’ utility bills to a minimum, and the home is zoned to maximize efficiency.

During construction, Jon built in a conduit and properly oriented surfaces for solar or other alternative power sources when the clean energy was economically and environmentally feasible. They also chose a low-energy-use “scene” lighting control system to provide optimum light levels at specific locations and installed ceiling fans throughout.

Low-flow plumbing fixtures reduce water demands, as does a recirculation pump for the water heater.

“What we wanted for our family was a modest and very comfortable home designed specifically for our desert lifestyle,” he adds. “And having lived here for eight years now, I think all of us believe this simple vision has been accomplished splendidly.”

David M. Brown is a 30-plus-year Valley resident who writes on architecture, design, the environment and other subjects.  He has two grown children, who keep him young, and a Border collie, who keeps him in line.  He can be reached at dmbrownone@msn.com.