Even though it may not be hot tea season yet (is it ever in Arizona?), you may need something to keep you warm and cozy in the frigid indoors! Seriously, it doesn’t need to feel like the arctic in the movie theaters. Anyway… if you’re looking for something tasty to sip — maybe a change from the usual Earl Grey — we found a cup or two you just might like. When choosing your tea, be sure to look for the organic label and a company that supports sustainability and fair trade practices, like the teas right here.

He said:  Chocolate Pu-erh… Haha! Okay, keep it together, John. Don’t be childish. Despite the name, this tea was actually quite tasty. It had a moderately strong chocolate and vanilla flavor that was rounded out by a nutmeg and cinnamon aftertaste. Add cream and sugar and you’ve got a delicious and healthy cup of hot cocoa. Clearly Numi thinks their Pu-erh doesn’t stink. (I couldn’t resist.)

She said:  Say it with me, “poo-AIR.” Yep. Go ahead and laugh, I’ll wait… This may be the next “green tea,” with 32 percent more antioxidants due to fermentation. It might be a nice coffee substitute too, with a smooth, dark flavor and notes of vanilla and chocolate. 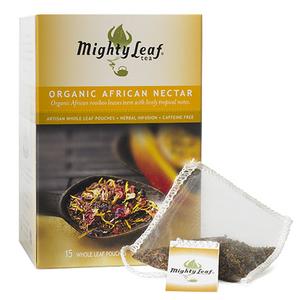 He said:  This Mighty Leaf tea has a floral vanilla and mango aroma that made it smell exactly like the inside of a Pier 1 Imports. Not that smelling like a Pier 1 is a bad thing, but the flavor was extremely mild. Rooibos leaves and flowers were the only thing I could taste, and I even over-steeped a cup to try to draw out more.

She said:  Tea from the African rainforest, that is, not the zebra-wildebeest-rhino section. Got it. I sipped excitedly after the pretty magenta color and hibiscus aroma drew me in. Sadly, it wasn’t as flavorful as I’d hoped. After a pinch of sugar, the delicate fruity flavor blossomed nicely and I was a happy camper (with a hammock in the trees and a mosquito net!). 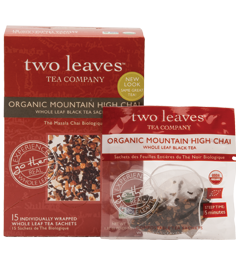 He said:  When it comes to chai, I’m a bit of a snob because my grandfather taught me a made-from-scratch ginger chai recipe that he learned in India. That being said, this Two Leaves tea is a nice spiced chai blend with a solid cardamom, clove and cinnamon flavor. The black tea was a little weak for my taste, but I would still keep these around for a quick cup of chai.

She said:  Mmmm, warm cinnamon water. Maybe it’s the coffee lover in me, but most teas are just bland hot water. I gave this one another shot by adding almond milk and turbinado sugar. Now that was a nice cup of chai — smooth with warm spices. Yummy! 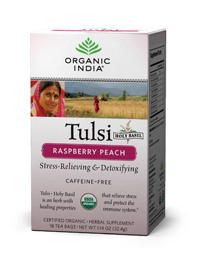 He said:  I had to think of this Organic India Tulsi tea as a vitamin in order to finish my cup. It has the strangest flavor that’s a cross between tart raspberries and herby basil. Yes, basil, as in spaghetti and pizza basil. It’s not the worst thing I’ve ever tasted, but it seems like there’s got to be a bunch of better ways to ingest this beneficial plant.

She said:   Tulsi is also known as “holy basil,” but I had to try really hard to taste any basil. I love pizza, but no thanks on pizza-tea! The raspberry soap aroma smelled great, but I didn’t want to drink it. It had more of a soft peach flavor, and needed no sugar. I bet it would make a great iced tea!

He said:  Ahhhhh. Nothing winds me down better than a hot cup of chamomile tea with a spoonful of honey in it. This Silk Road Tea has the smoothest and best-tasting chamomile I’ve ever had. Whole chamomile flowers give it a strong flavor with a sweet apple aftertaste. It was so good I made a second cup while…I was (yawn) writing… this review… ZzZzZzz…

She said:  This classic tea might be calming, but it’ll sure wake up your taste buds! I was impressed at the burst of apple-like flavor from these cheery, subtle yellow buds. It was naturally sweet, but a little honey made this cuppa mighty tasty. 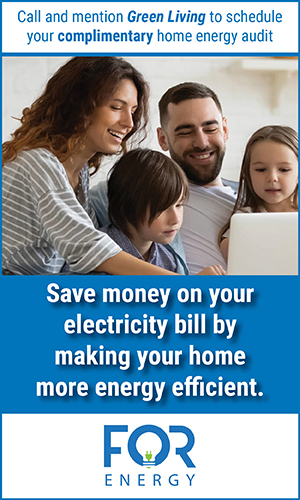