This month we decided to test our cold tolerances to the max. You know, just for fun. Cryotherapy – it’s not just for heads anymore!  Oh wait, that’s cryonics. MUCH different than the thing we tried. Thank goodness. We arrived at our local therapy center, stripped down to our skivvies, donned soft robes, socks, and slippers, and then got a brief tour of the other modes of torture (healing) offered, which included a room where they poke you with needles (intravenous therapy), a sweat box (infrared sauna), a limb crusher (compression therapy), and a claustrophobia tube (hyperbaric oxygen therapy). Lastly, we arrived at a room with one thing in it – a space pod full of fog that looked like it came right out of a sci-fi movie. You know, the one you sleep in for like 30 years. Here goes nothing… 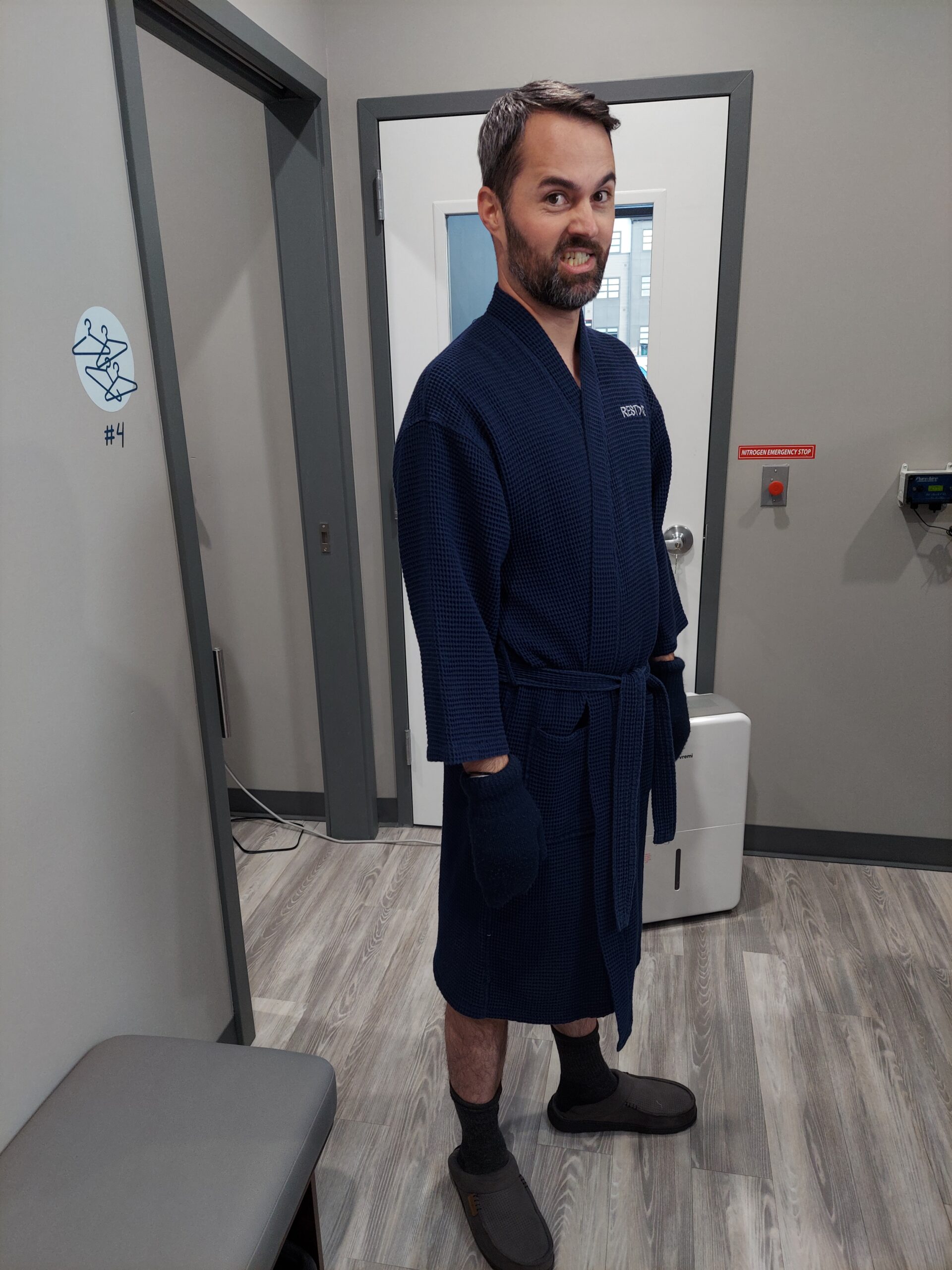 For some unknown reason I volunteered to go first, so into the pod I went. So now I’m standing there in nothing but a robe, socks and tighty-whities, and the negative166-degree liquid nitrogen vapor starts rolling in. I remember regretting a few of my life decisions. Time was relative at that point, so the next two and a half minutes felt like an eternity. I exited the pod, and my skin surface temperature had dropped almost 25 degrees. Over the next ten minutes, I felt a strong internal warming sensation and even started to sweat a bit as my body went into overdrive to warm back up. This was a pretty unpleasant experience and not something I would recommend doing just because you’re bored, but I could see this helping with circulation, weight loss, and cold resistance if I did it often. No pain, no gain, right?

I can’t say that I ever willingly wanted to make myself a popsicle, but there I was – ready to freeze my buns off! Naturally, I hesitated long enough that John volunteered to go first. Yippee! Turns out, that was a mistake – the variety of expressions on John’s face made me question that choice. There was no turning back though, and I stepped inside the foggy chamber. Stepping in wasn’t bad at all, but then the swirling air cooled down VERY quickly. Negative 166 degrees is impressive and also a bit insane! I was really counting on my robe, gloves and socks to keep me from becoming an ice cube. My poor uncovered legs, closest to the vents, took the brunt of the cold and stung like the dickens. But just when I was considering tapping out, a familiar song I used to karaoke started flowing through the chamber speakers. “Ice Ice Baby” got me moving and singing and soon I stopped wondering if my legs were still there. Poor John only had the chattering of his own teeth for music. It was the longest and coldest two and a half minutes of my life, but I was proud to make it through the whole session and relieved when that door opened! I definitely felt invigorated, alert, and, later, ready to relax into bed by 8:30 p.m. Would I do it again? Yeah, it wasn’t that bad. Not to mention convenient, with no special preparation or clothing needed, and it only takes minutes!