Cox Conserves Heroes: Honoring Those Working for the Environment 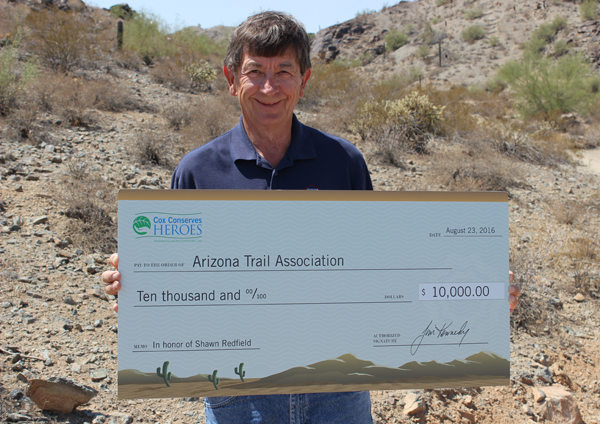 There are many ways in which individuals can fight for conservation. Adopting sustainable policies at work, lobbying local politicians to pass green initiatives, or spreading helpful information can help tremendously. However, one of the best ways to create a positive impact on the local environment is simply to get out and volunteer.

Cox Communications recognizes the importance of good volunteer work. Through a collaboration between their parent company Cox Enterprises and the Trust for Public Land (TPL), they honor volunteers every year through the Cox Conserves Heroes awards program. The heroes are those “who create, preserve or enhance the shared outdoor places in our communities,” and this awards program recognizes them annually in several cities around the country. Arizona’s 2016 program celebrated the fifth award given in our state, and the 50th overall since the program’s inception.

Though concentrated on celebrating individual efforts, Cox Conserves Heroes is a program in which teamwork and organizations truly benefit the public. Any member of the community can nominate a deserving environmental volunteer. Projects considered involve park maintenance and beautification, water conservation, community engagement with public places, and anything that helps grow the use of public space for environmental efforts. From the nominees, a panel of civic leaders in the conservation and sustainability fields, called the Heroes Judging Circle, selects three finalists. Each finalist is profiled by Cox Conserves, then the general public votes for their preferred winner online.

Winners receive $10,000 for the nonprofit of their choice, usually the same organization with which they volunteer their time. This year’s winner was Shawn Redfield of Phoenix, who has a full-time volunteer position as the Trail Director for the Arizona Trail Association. Redfield said the prize money will help to improve and maintain the 800 miles of hiking, biking and horseback trails that wind through the state’s varied ecosystems, connecting Mexico to Utah.

The other finalists were Tim Flood of Phoenix, who volunteers for Audubon Arizona collecting data on rivers and bird populations; and Dennis McClung of Mesa, founder of nonprofit Garden Pool, which designs space-saving sustainable systems for growing food. Each runner-up receives $5,000 each for their chosen nonprofits. McClung was in collaborative spirits, at the awards ceremony on August 23, saying he was excited to use the money to “share what we’re doing with the rest of the world.”

In the past few years, Cox Conserves Heroes has supported over 150 volunteers in the overall program, and donated more than $650,000 to environmental nonprofits. Beneficiaries include local efforts like the bird rescue Wild at Heart, whose own Greg Clark received the $10,000 prize in 2014. His colleague Bob Fox said of the program: “the money definitely helped the organization grow,” and he was grateful that “a very large corporation [Cox] has such a heart.”

To learn more about Cox Conserves Heroes and getting involved, visit coxconservesheroes.com.

Michael Cohen is an Arizona native who lives and writes in Tempe. He enjoys traveling and considers reading an efficient method of doing so. Recently, he completed a degree in Creative Writing at Arizona State University.

The Bayer Fund serves nonprofits in the communities where Bayer facilities, such as the Bayer...
Good