Surmelis’ personal life has been filled with ups and downs, but his career is filled with happy accidents and taking chances.

His favorite movie is “The Godfather,” he listens to Annie Lennox, sips on La Crema Pinot Noir, wears a black motorcycle jacket that he found in a thrift store – and above all, his favorite color is green. Of course it is!

This is not the only reason that Angelo Surmelis, a TV personality, interior designer, furniture designer, and author is featured in our Design issue. We love the fact that he is a huge supporter of sustainability. Surmelis is an ambassador with the Sustainable Furnishings Council, located in High Point, North Carolina – which is also known as the “Furniture Capital of the South.” [More about SFC can be found on page 22 in this month’s issue]. Surmelis joins a prestigious list of interior and furniture designers including Mitchell Gold + Bob Williams, Kathy Ireland, and Thom Filicia to name a few. The SFC’s
campaign, “Why Green? Why Not?” includes Surmelis’ quote: “Design is about enriching lives. What better way than making it green? A ginormous no brainer.”

Surmelis has been a SFC ambassador for more than ten years. Susan Inglis, Executive Director of SFC and resident expert with the organization, says, “Angelo Surmelis is a wonderful champion of our cause. We have enjoyed working with him in sustaining a healthy future for over 10 years. Together, there is plenty more work to do—we enjoy working with him now, and we know it will be a pleasure as we progress.”

Inglis goes on to say, “The way [Surmelis’] furniture line is transported and how it is made is not different and better—it’s more mainstream, and it’s very efficient, from the logistics of shipping and making good choices when specifying materials such as wood and fabrics.”

The love-fest between Surmelis and Inglis is genuine. “I was impressed with the furniture industry because I am a furniture geek and [Inglis] is a green geek, and the two of us together wondered, how do we make these two worlds merge? I instantly fell in love with her narrative and asked, how can I help? …She suggested that I get other manufacturers to join us and lessen the footprint. For me, it was a love-fest but it made perfect sense,” Surmelis says.

At the age of five, Surmelis emigrated with his family from Greece to the United States. They moved to Chicago with little money and found a tiny apartment to live in. “This apartment was so tiny that I figured I could make it bigger if I leaned on the walls. When that didn’t work, I started to move the furniture around. One day my mother went to stop me, and my dad said, ‘Don’t stop him, I don’t know what this kid is doing, but whatever he is doing, the place looks better.’” 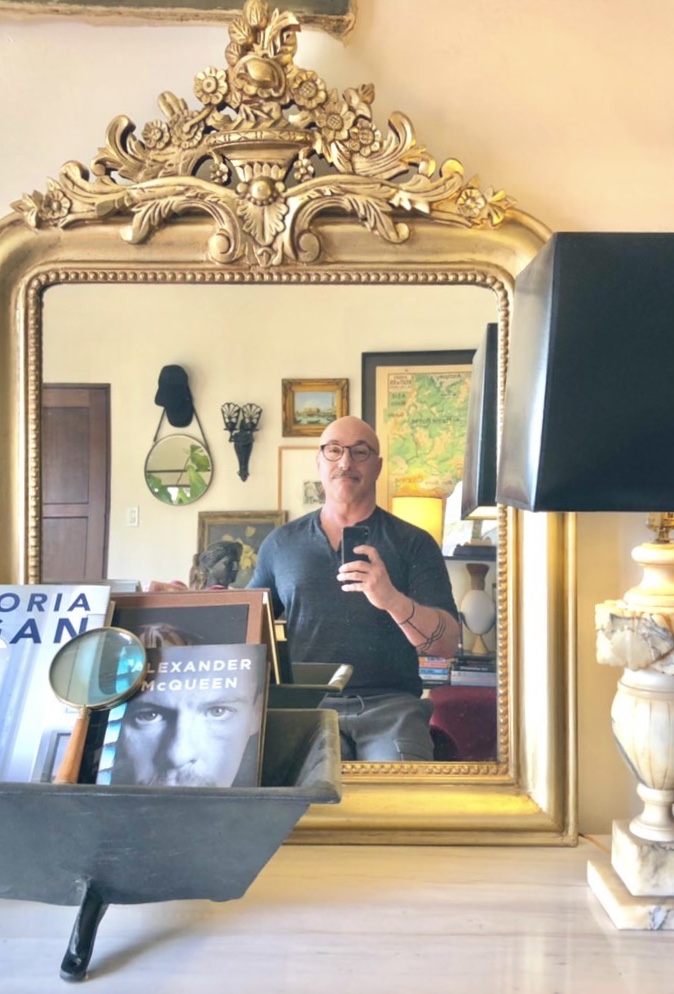 Surmelis started his own furniture line over 13 years ago because he wanted to shop in the kind of establishment that he dreamt about when he was a kid. Hence, angelo:Home was born. “We launched the brand in 2008—no planning whatsoever—I always wanted to do this. I wanted to have my own line of affordable furnishings because I grew up not being able to afford anything, and I thought, if I am going to be in design, I want to make
things attainable for people. All of this was before Target was doing what they were doing and the Wayfairs were doing what they were doing. Affordable home goods were not available. I really wanted to break the mold and do something colorful and fun.”

Surmelis’ line is less about trends and more about living your style. He says that he designs pieces to be affordable, stylish, and hopefully inspiring for you to include in your home decor alongside all of your own personal finds. One of the ways that he practices sustainability is by eliminating all the extra packing materials used in shipping his furniture. Another way is by reusing old furniture and repurposing great finds. He encourages his design clients to repurpose their own furniture as well. Rather than throwing away a good chair or sofa, he has them reupholstered instead. A new piece of fabric will breathe new life into a faded chaise that was about to be discarded.

“I worked with a client who had some great pieces with beautiful lines. This one piece, a barrel chair from Crate and Barrel that she bought years ago—she wanted it, even though the fabric was dull. Then, she showed me another chair that was $3000. I said we could make that chair look like this one by changing the fabric and having it reupholstered…She had great pieces and saw the treasure in that piece. That’s the magic in a great client relationship—you have a client who trusts the process. To me, the excitement is how we took a really great piece and saved it from the landfill and showed her how amazing it now looks,” Surmelis said.

Surmelis is a master at finding trash and making it into treasure. As he surveys his home to select a favorite find to share with us, he eyes a four-foot-tall plant stand. “This plant stand is mid-century modern and looks like a piece of art. It looks like a sculpture to me. I found it in a dumpster, because back in the day when I didn’t have any money, I would dumpster-dive all the time. I found amazing things that people would throw out. I have had that for probably 30 years—every place I have gone, I dragged that thing with me.” On the other side of the spectrum is something more opulent. “I have a vintage 1800s French chandelier that I paid way too much money for. It costs more than my first three cars combined. It’s the first time I made some real money and I thought, what am I doing? My hand was shaking as I was paying for it—but I will never get rid of it. It covers the spectrum of something I got out of a dumpster that I dove into and walked home with to this very ‘boujee’ chandelier.” 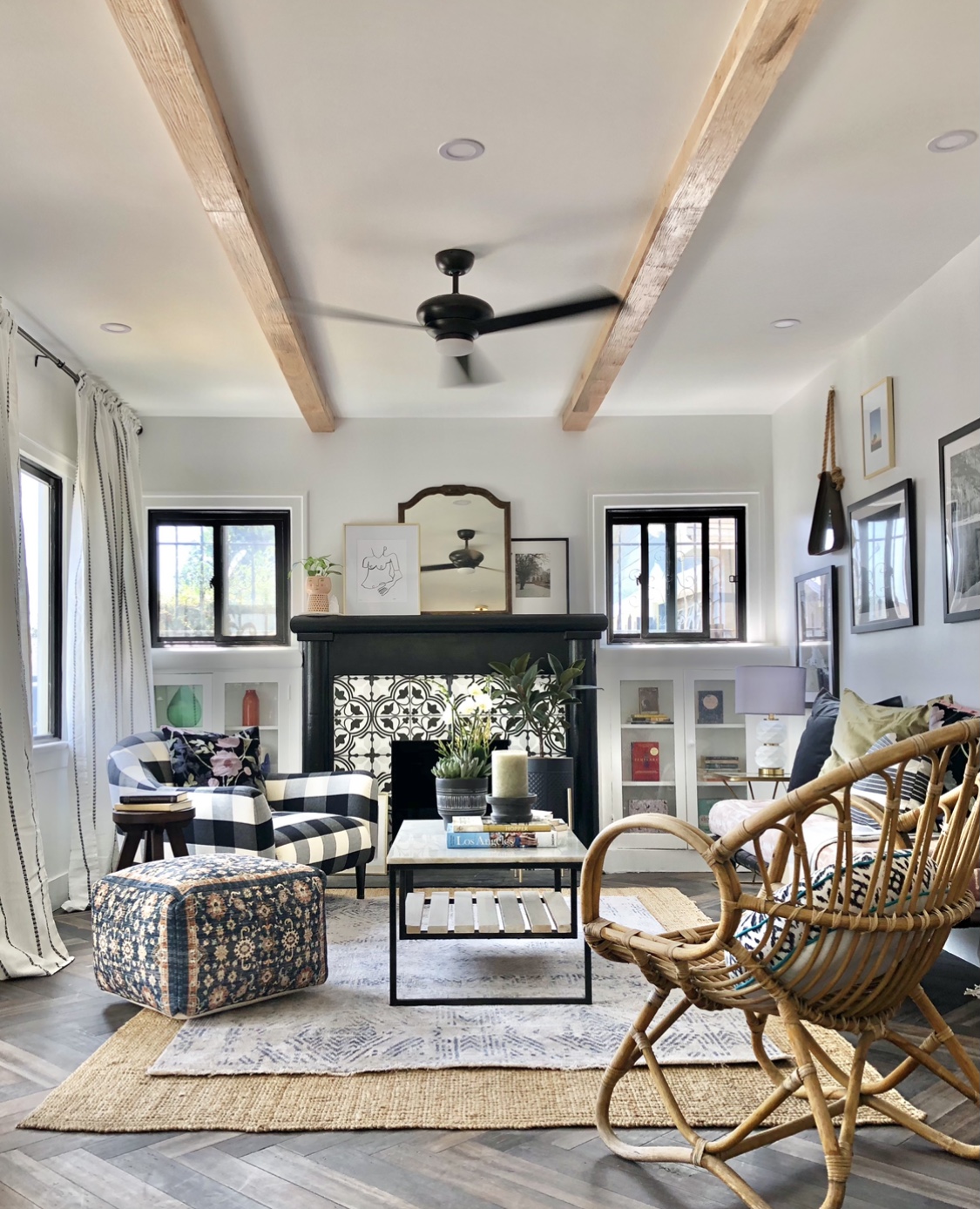 Surmelis’ personal life has been filled with ups and downs, but his career is filled with happy accidents and taking chances. He is an award-winning interior designer, and has appeared on several shows on HGTV and TLC. He started his own furniture line more than 12 years ago, and most recently, has written a novel titled The Dangerous Art of Blending In. The book is a raw and powerful story based on Surmelis’ childhood. Writing it was cathartic for him, and he says it was the world’s longest journal entry.

“Essentially, the book is about a young Greek boy growing up in the Midwest who has to learn how to deal with being gay,” he explains. “He struggles with that while living in a very abusive household that doesn’t want him to be gay. He has to learn to stand up for himself and figure out how to be who he is and be okay with that. It was an autobiographical story, but it was done in a way that was fictionalized because I didn’t want [to write] a memoir. I
wanted to write a book that I wanted to read when I was kid, because when I was growing up I didn’t see anybody like me. It was tough. There was a time in my life that I didn’t want to be around anyone. I didn’t want to live anymore because I carried this pain. The beauty of this book was that I heard from so many kids from around the world saying that they thought they were the only one’s going through this too.”

During COVID-19, Surmelis got back into creating art to pass the time. Collages, he says, are one of his favorite art forms because they give him the ability to use layers of images to tell a story—similar to what he does in interior design.

Sedona’s Verde Valley is a destination famous for its cultural evolution and opportunities for spiritual...
Savor

The holiday season is here and, no matter what you celebrate, chances are that your...
Savor