A Garden That Grows Food Fast: A new micro-garden approach may take food scarcity off the table

Most of us can choose what our next meal will be, from eating out, to making a home-cooked meal, or even reheating leftovers. Unfortunately, many in this country experience uncertainty about where their next meal will come from. According to Feeding America, the largest hunger-relief organization in the United States, in 2016 an estimated one in eight Americans experienced food insecurity.

The U.S. Department of Agriculture (USDA) defines food insecurity as a lack of consistent access to enough food for an active, healthy life. According to the same 2016 study, 42 million Americans, including 13 million children, experienced food insecurity. That’s why one Indiana-based startup company is making it their goal to end food scarcity in our lifetime.

A NEW SOLUTION TO FOOD INSECURITY

Aggressively Organic, a public benefits corporation and intellectual property company focused on agricultural bioscience technology, has created the Micro Growth Chamber System for consumers and community supported agriculture (CSA) models. With both initiatives and more products and programs waiting in the wings, Founder and CEO Jonathan Partlow believes that the company has the freshest, most innovative solution to food insecurity, not just in the U.S., but around the globe.

Aggressively Organic’s Micro Growth Chamber Systems provide affordable grow-at-home hydroponic systems that utilize the back-end of the supply chain, which is sustainable harvesting. Since a plant loses a significant amount of its nutritional value the moment it is harvested, Aggressively Organic encourages users to engage in the “harvest when hungry” method and continue to let the plant grow, providing a continuous source of food. These patent-pending systems support sustainable agricultural food production, using less water, energy and waste.

WHERE DOES YOUR GARDEN GROW? 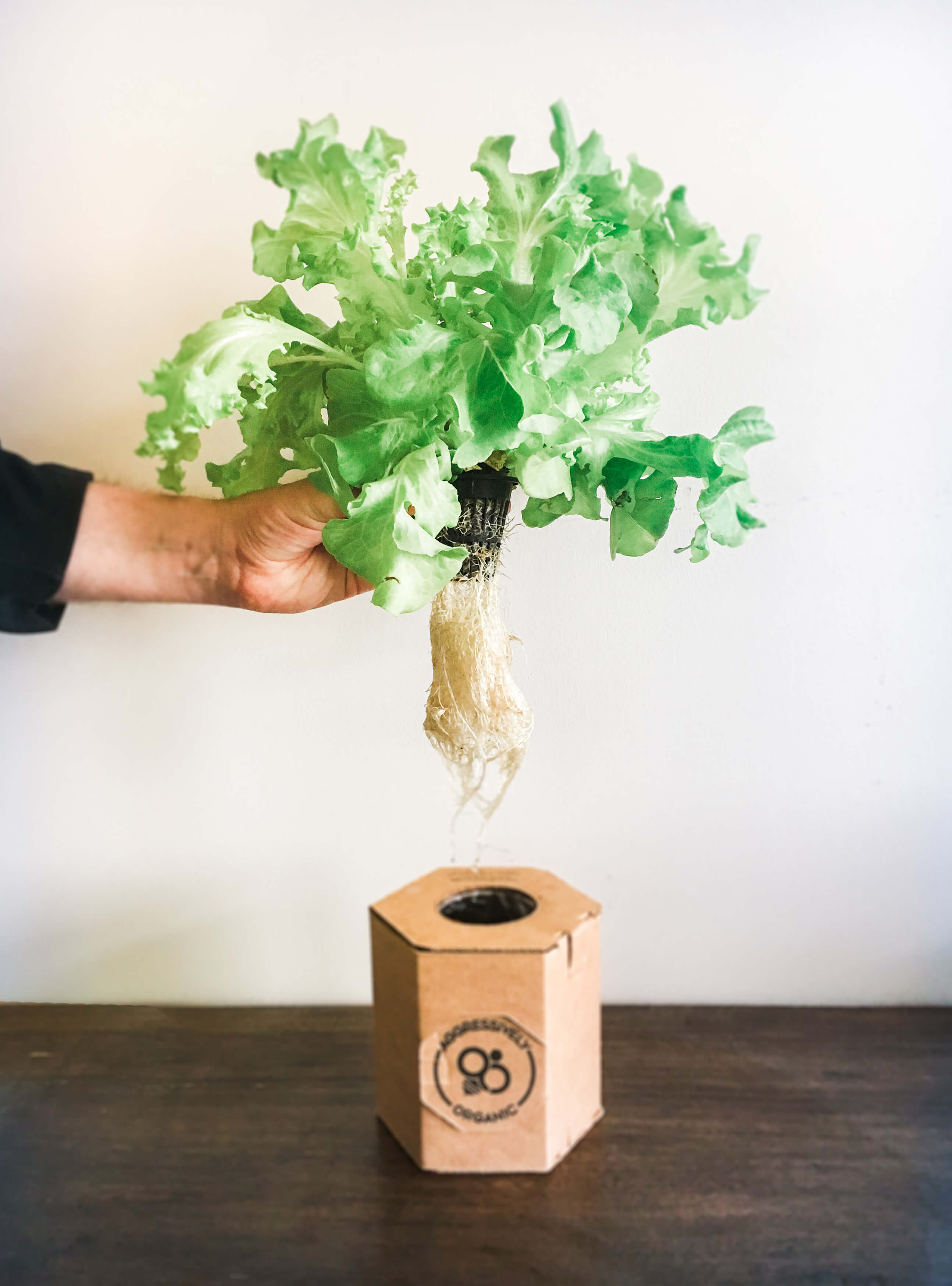 Each chamber is personalized for each consumer, allowing plants to grow in a flower-pot-sized cardboard box with its roots sitting in a pod – similar to a K-cup (pods designed for single-cup coffee makers) – and extending into a small bag of water held inside the chamber. The concept is similar to other hydroponic systems, which allow individuals to grow crops year-round in a controlled indoor setting. But one thing is different. Aggressively Organic’s method swaps out typical requirements for hydroponic systems (special lighting, temperature controls and water pumps) for a self-contained box at a fraction of the cost.

“We had to create a system that anyone could afford and use,” said Jonathan Partlow. “There are no pumps, no electricity and very minimal plastic.”

A normal head of lettuce typically needs about 3.5 gallons of augmented water to grow, but a head of lettuce in a Micro Growth Chamber only needs 16 ounces. These micro-gardens can grow 365 days per year and only need water every few weeks. Aggressively Organic is continuing to experiment with the types of food it offers, but currently includes lettuce, tomatoes, bok choy, hot peppers, herbs and more.

Coined with the name Aggressively Fresh Farms, the CSA models will be set up as a hydroponic growing space, allowing individuals to visit and pick up systems to use at home, and then dropping them back off at the growing space once they’re done. The company is already developing its flagship 40,000-square-foot CSA space in Fishers, Indiana this year and has plans to have additional CSA farms across the country by the end of 2018.

The startup, in its first year of operation, is already making strides in the sustainable agricultural industry. Most recently, Aggressively Organic was the first company ever to be named both a Challenge Prize Session winner and People’s Choice winner at this year’s Food+City Challenge Prize competition during South by Southwest (SXSW), winning $10,000 and top recognition among participating supply chain startups. This year’s finalists presented solutions to address issues in our food supply chain, such as food insecurity and food waste.

Overall, the company believes that micro-gardens and community supported agriculture initiatives can help solve food insecurity within our lifetime and actively work to support other organizations with the same mission. Together, with enough innovative technology and like-minded experts, this vision is attainable.

“Aggressively Organic’s systems truly changed my life. Before using their micro-gardens, I lived an unhealthy lifestyle”, said Mike Conk, COO of Aggressively Organic. “But their products made it easier to change my eating habits.” 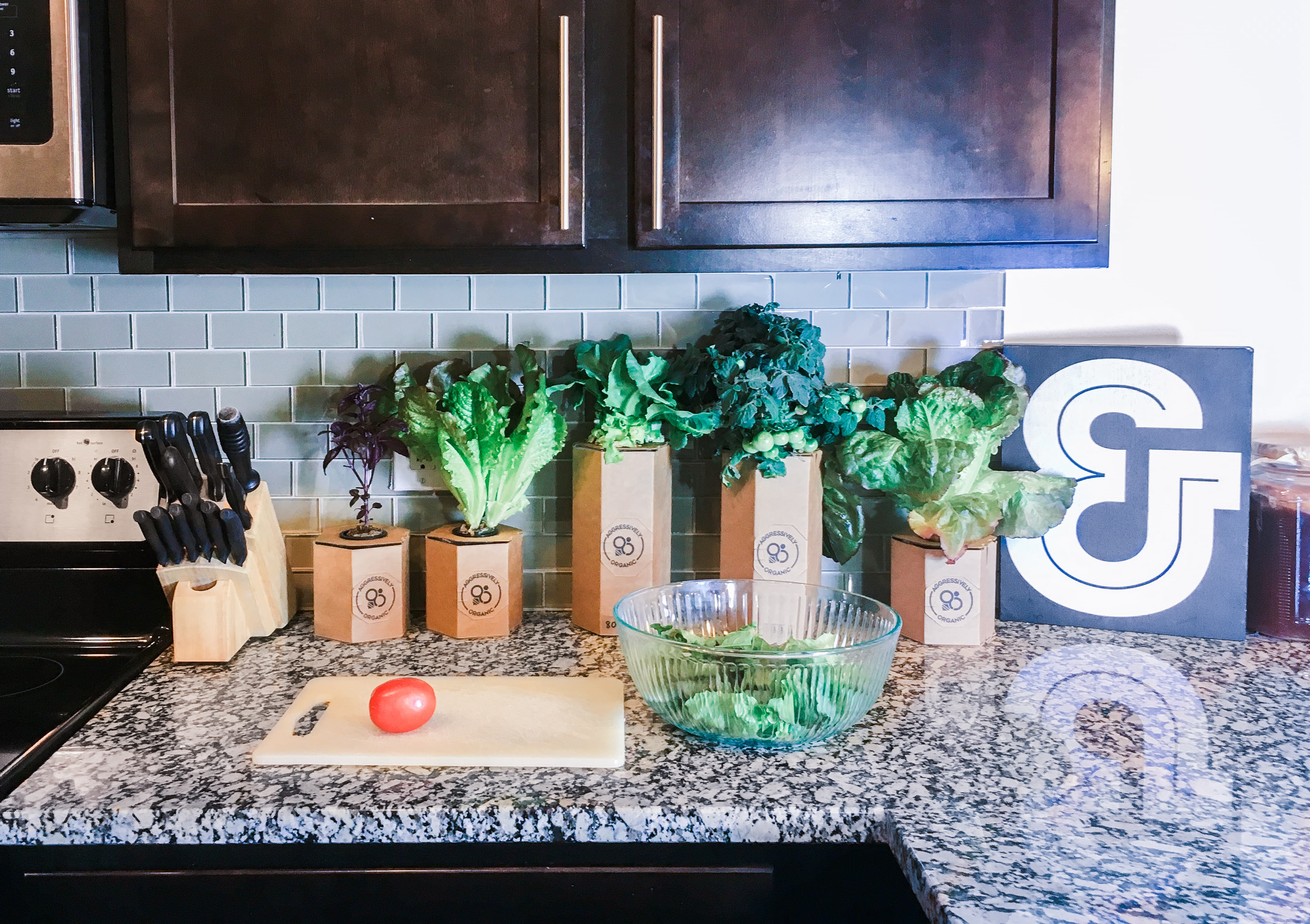 Daniel Tweedall is the director of strategic partnerships for Aggressively Organic. If you want your city to be on the list of next possible locations for Aggressively Fresh Farms, or if you want to learn more about creating your own micro-garden, visit aggressivelyorganic.com.